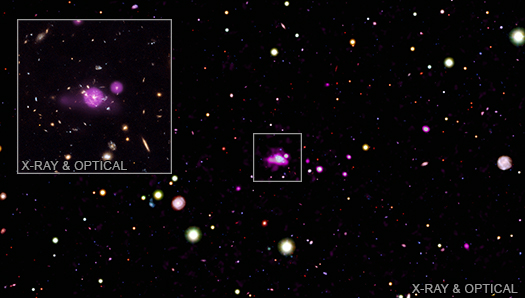 Often, a spiderweb conjures the idea of captured prey soon to be consumed by a waiting predator. In the case of the "Spiderweb" protocluster, however, objects that lie within a giant cosmic web are feasting and growing, according to data from NASA's Chandra X-ray Observatory.

The Spiderweb galaxy, officially known as J1140-2629, gets its nickname from its web-like appearance in some optical light images. This likeness can be seen in the inset box where data from NASA's Hubble Space Telescope shows galaxies in orange, white, and blue, and data from Chandra is in purple. Located about 10.6 billion light years from Earth, the Spiderweb galaxy is at the center of a protocluster, a growing collection of galaxies and gas that will eventually evolve into a galaxy cluster.

To look for growing black holes in the Spiderweb protocluster a team of researchers observed it for over eight days with Chandra. In the main panel of this graphic, a composite image of the Spiderweb protocluster shows X-rays detected by Chandra (also in purple) that have been combined with optical data from the Subaru telescope on Mauna Kea in Hawaii (red, green, and white). The large image is 11.3 million light years across.

Most of the "blobs" in the optical image are galaxies in the protocluster, including 14 that have been detected in the new, deep Chandra image. These X-ray sources reveal the presence of material falling towards supermassive black holes containing hundreds of millions of times more mass than the Sun. The Spiderweb protocluster exists at an epoch in the Universe that astronomers refer to as "cosmic noon". Scientists have found that during this time — about 3 billion years after the big bang — black holes and galaxies were undergoing extreme growth.

The Spiderweb appears to be exceeding the lofty standards of even this active period in the Universe. The 14 sources detected by Chandra (circled in a labeled image) imply that about 25% of the most massive galaxies contain actively growing black holes. This is between five and twenty times higher than the fraction found for other galaxies of a similar age and with about the same range of masses.

These results suggest that some environmental factors are responsible for the large number of rapidly growing black holes in the Spiderweb protocluster. One cause may be that a high rate of collisions and interactions between galaxies is sweeping gas towards the black holes at the center of each galaxy, providing large amounts of material to consume. Another explanation is that the protocluster still contains large quantities of cold gas that is more easily consumed by a black hole than hot gas (this cold gas would be heated as the protocluster evolves into a galaxy cluster).

A detailed study of Hubble data may provide important clues about the reasons for the large number of rapidly growing black holes in the Spiderweb protocluster. Extending this work to other protoclusters would also require the sharp X-ray vision of Chandra.

A paper describing these results has been accepted for publication in the journal Astronomy and Astrophysics and a preprint is available online. The first author is Paolo Tozzi from the National Institute for Astrophysics in Arcetri, Italy.

Animation & Video
A Tour of the Spiderweb
Galaxy Field