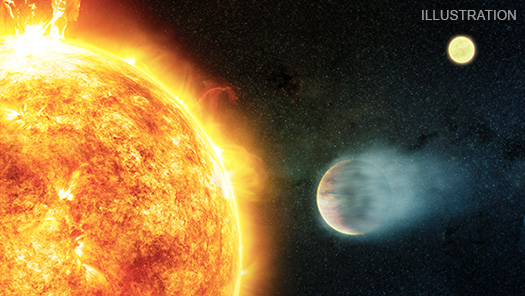 An artist’s illustration shows a gas giant planet (lower right) closely orbiting its host star (left), with another star in the distance (upper right). The two stars are themselves in orbit with each other. As explained in our latest press release, a team of scientists used NASA’s Chandra X-ray Observatory and ESA’s XMM-Newton to test whether such exoplanets (known as “hot Jupiters”) affect their host star in comparison to the star that does not have one. The results show that these exoplanets can make their host star act younger than it is by causing the star to spin more quickly than it would without such a planet.

The double-star (or “binary”) system in the illustration is one of dozens that astronomers studied using Chandra and XMM-Newton to look for the effects of hot Jupiters on their host stars. A hot Jupiter can potentially influence its host star by tidal forces, causing the star to spin more quickly than if it did not have such a planet. This more rapid rotation can make the host star more active and produce more X-rays, making it appear younger than it really is.

The stars in binary systems form at the same time. The separation between the stars studied by the team, however, is much too large for them to influence each other or for the hot Jupiter to affect the other star. Studying such systems eliminates the challenge that astronomers face in precisely determining the age of individual stars, allowing them to avoid trying to account for the natural decrease in spin rate and activity that occur as stars age. In this new study, the companion star acts as a control for the star with the hot Jupiter.

The team measured the amounts of X-rays produced by the stars to determine how “young” they are acting by studying almost three dozen systems in X-rays (the final sample contained 10 systems observed by Chandra and 6 by ESA’s XMM-Newton, with several observed by both telescopes). The study revealed that the stars with hot Jupiters tended to be brighter in X-rays and therefore more active than their companion stars without hot Jupiters. In the illustration the more active star with the hot Jupiter shows flaring activity and the distant companion star does not. The illustration also shows some of the exoplanet’s atmosphere being blasted away by radiation from its host star.

Separate graphics show Chandra data for two of the systems where one star is orbited by a hot Jupiter (HD189733 and WASP-77) and two with neither star orbited by a hot Jupiter (HD46375 and HD109749). In the latter two systems one of the stars hosts a planet that is more distant or has a lower mass than a hot Jupiter. The stars with hot Jupiters are clearly brighter than their companion stars, including a non-detection for the companion in WASP-77. The stars without hot Jupiters have comparable brightness to their companions. This dependence of a star's X-ray brightness on the type of planet it hosts shows that hot Jupiters make their host stars act younger than they really are.