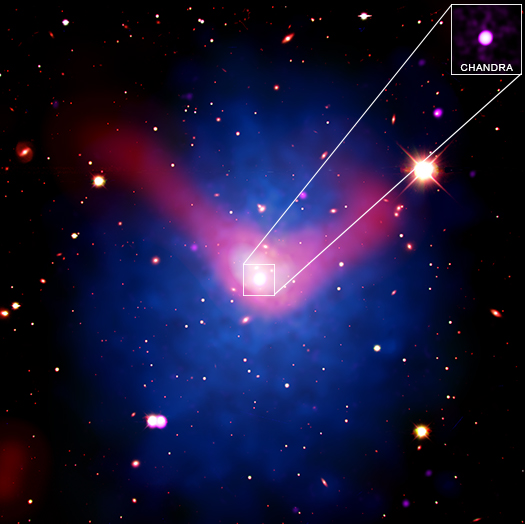 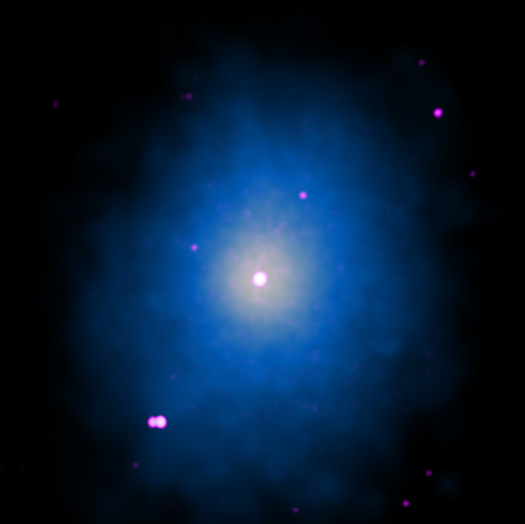 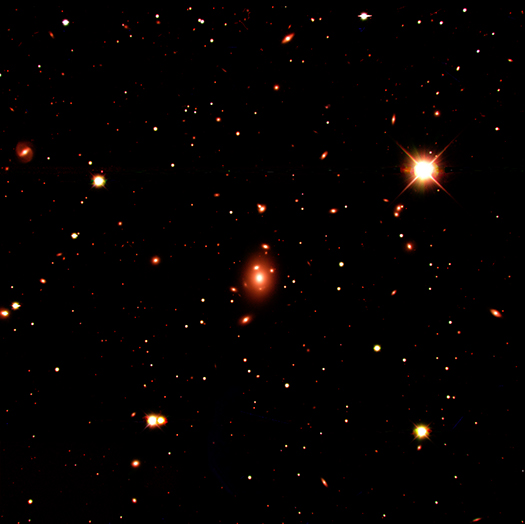 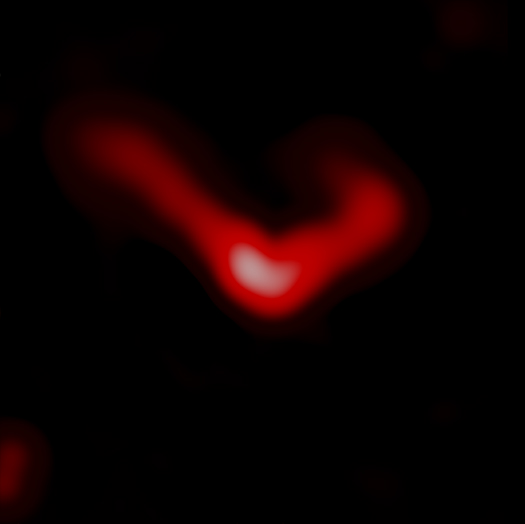 Researchers have found a galaxy cluster acting like a passenger on what astronomers are calling an "intergalactic highway." The cluster is known as the "Northern Clump" and it is located about 690 million light years from Earth. Previously, scientists discovered an enormous filament, a thin strip of very hot gas that stretched for at least 50 million light years. A new study found evidence that the Northern Clump is traveling along this filament, similar to how a car moves along the interstate.

A composite with ESA's XMM-Newton (blue), Chandra data (purple), optical and infrared data (orange, green, blue), plus radio data from the Evolutionary Map of the Universe survey made by the Australian Square Kilometer Array Pathfinder telescope (red) is shown with an inset with the Chandra data.

Also included is a side-by-side graphic. On the left side of this panel is an optical and infrared image from the Dark Energy Camera in Chile. The right side contains an X-ray image from ESA's XMM-Newton (blue), with high-precision X-ray data from NASA's Chandra X-ray Observatory are in the inset (purple).

Each telescope gives important information about this system. For example, the optical data provides a view of the galaxies in the cluster, while the XMM-Newton data reveal hot gas in the cluster with temperatures of millions of degrees. The Chandra data show hot gas around a supermassive black hole in the middle of a galaxy in the cluster's center.

Previous observations from the extended ROentgen Survey with an Imaging Telescope Array (eROSITA) have shown that the Northern Clump and a pair of galaxy clusters to the south all lie along an enormous filament of gas. The Northern Clump is moving towards the other clusters and all three will eventually merge with each other. The other two clusters, Abell 3391 and Abell 3395, are not shown in this image.

In the radio data, astronomers found a pair of jets of particles being ejected from regions close to the black hole that point backwards like the braids of a runner. The X-ray shows evidence of a bow shock, like the sonic boom from a supersonic plane, towards the south and a tail of hot gas towards the north that is likely being dragged off the cluster as it moves. The bend in the radio jet and both of these X-ray features are consistent with the cluster traveling south along the filament towards the other two clusters. These results agree with simulations showing that galaxy clusters grow by traveling towards each other along enormous filaments of gas, before colliding and merging.

These results, led by Angie Veronica of the University of Bonn in Germany, were presented at the recent European Astronomical Society meeting. A paper describing this study has been submitted to Astronomy & Astrophysics journal and is available online. NASA's Marshall Space Flight Center manages the Chandra program. The Smithsonian Astrophysical Observatory's Chandra X-ray Center controls science from Cambridge Massachusetts and flight operations from Burlington, Massachusetts.