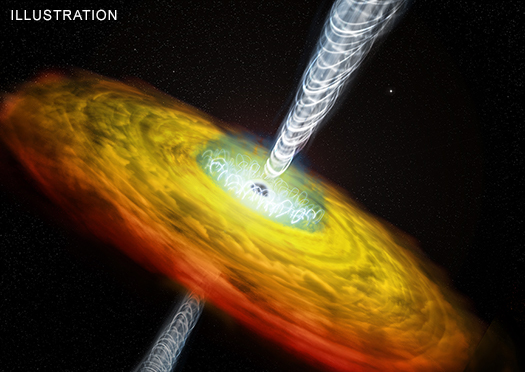 Scientists have studied more than 700 quasars — rapidly growing supermassive black holes — to isolate the factors that determine why some of these black holes launch jets and others do not, as reported in our latest press release. A new study using NASA's Chandra X-ray Observatory and other telescopes reveals the key role that regions of diffuse hot gas threaded with powerful magnetic fields — called a black hole "corona" — play in dictating whether the system creates a jet.

This artist's illustration depicts a supermassive black hole, and its corona (blue) threaded by magnetic fields (white). The corona lies above a much denser disk of material (red and yellow), swirling around and falling towards the black hole. Jets (white) of material are blasting away from the black hole and corona in opposite directions.

The potential difference-maker appears to a black hole corona. Previous studies had shown that quasars without jets show a characteristic link between the strength of their X-ray and ultraviolet emission. This correlation is explained by ultraviolet light from the disk of the black hole striking particles in the corona. The resulting energy boost converts the ultraviolet light to X-rays.

In the new study the team chose to investigate the behavior of quasars that do have jets. They found a correlation between how bright the different quasars are in X-rays and ultraviolet light that is remarkably similar to that found for quasars without jets. They concluded that the X-ray emission in the jet-powering quasars is also produced by a black hole corona.

The team's sample consists of 729 quasars with jets. Chandra, ESA's XMM-Newton, and Germany's ROentgen SATellite (ROSAT) were used for 212, 278, and 239 quasars respectively. The size and quality of the team's sample explain why they were able to uncover the cause of the X-ray emission. The study also used data from the NSF's Karl G. Jansky Very Large Array and the Sloan Digital Sky Survey (SDSS) optical telescope.

Blog: The Symbiosis of Powerful Quasar Jets and
Their Bright Coronas