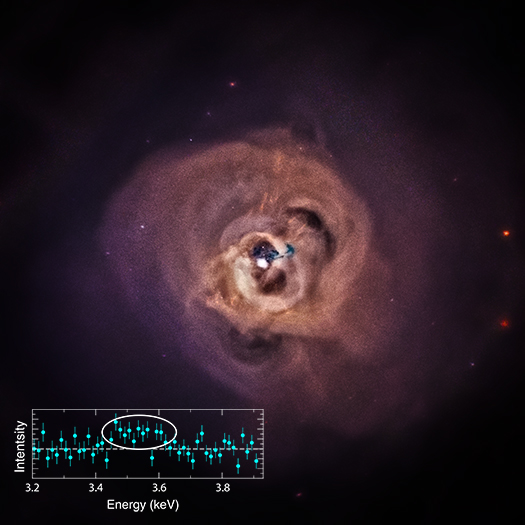 A new study of the central region of the Perseus galaxy cluster, shown in this image, using NASA's Chandra X-ray Observatory and 73 other clusters with ESA's XMM-Newton has revealed a mysterious X-ray signal in the data. This signal is represented in the circled data points in the inset, which is a plot of X-ray intensity as a function of X-ray energy. The signal is also seen in over 70 other galaxy clusters using XMM-Newton. This unidentified X-ray emission line - that is, a spike of intensity at a very specific energy, in this case centered on about 3.56 kiloelectron volts (keV) - requires further investigation to confirm both the signal's existence and nature as described in the latest Chandra press release.

One intriguing possible explanation of this X-ray emission line is that it is produced by the decay of sterile neutrinos, a type of particle that has been proposed as a candidate for dark matter. While holding exciting potential, these results must be confirmed with additional data to rule out other explanations and determine whether it is plausible that dark matter has been observed.

There is uncertainty in these results, in part, because the detection of this emission line is pushing the capabilities of both Chandra and XMM-Newton in terms of sensitivity. Also, there may be explanations other than sterile neutrinos if this X-ray emission line is deemed to be real. For example, there are ways that normal matter in the cluster could have produced the line, although the team's analysis suggested that all of these would involve unlikely changes to our understanding of physical conditions in the galaxy cluster or the details of the atomic physics of extremely hot gases.

This image is Chandra's latest view of hot gas in the central region of the Perseus Cluster, where red, green, and blue show low, medium, and high-energy X-rays respectively. It combines data equivalent to more than 17 days worth of observing time taken over a decade with Chandra. The Perseus Cluster is one of the most massive objects in the Universe, and contains thousands of galaxies immersed in an enormous cloud of superheated gas. In Chandra's X-ray image, enormous bright loops, ripples, and jet-like streaks throughout the cluster can be seen. The dark blue filaments in the center are likely due to a galaxy that has been torn apart and is falling into NGC 1275 (a.k.a. Perseus A), the giant galaxy that lies at the center of the cluster. A different view of Perseus, shown below, combines data from Chandra in the inner regions of the cluster and XMM data in regions further out.

A paper describing the detection of this mysterious emission line was published in the July 1st issue of The Astrophysical Journal and a preprint is available online. The first author is Esra Bulbul of Harvard-Smithsonian Center for Astrophysics (CfA) in Cambridge, MA, and NASA's Goddard Space Flight Center (GSFC) in Greenbelt, MD. The co-authors are Maxim Markevitch from GSFC, Adam Foster and Randall Smith from CfA, Michael Loewenstein from University of Maryland in College Park MD and GSFC, and Scott W. Randall from CfA.

Only a week after Bulbul et al. placed their paper on the arXiv, a different group, led by Alexey Boyarsky of Leiden University in the Netherlands, placed a paper on the arXiv reporting evidence for an emission line at the same energy in XMM-Newton observations of the galaxy M31 and the outskirts of the Perseus cluster. This strengthens the evidence that the emission line is real and not an instrumental artifact.

Proud to have been the NASA Flight Director to lead this great Shuttle mission STS-93.
My Flight Director call sign is Perseus Flight. How about that?
Keep up the good work.
Bryan Austin

So much wars and suicides and self torturing in the space...

Howdy. Would you mind if I share your blog with my twitter group? There's lots of people that I believe would really enjoy your content. Please let me know. Thanks

Thank you so much.

If I am not mistaken, Manuel, Gravitational energy is a form of electromagnetic energy. Therefore, one has no greater significance than the other.
Marv, I am certain that this would not be the first contact with an extraterrestrial species, if in fact it is a form of communication being picked up in these emissions. Through historical analysis of evidence left by earlier humans of their experiences with other-than-Earthbound species, we can reach the conclusion that contact has been previously made.
I hope these comments are helpful and useful.

Hi. Is gravity force more powerful than
electromagnetic force? What is the main equation relating these two forces?

What is radiation - a light, what is its source?

If it can't be seen "or even proven to exist" how can we say it makes up 85% of the universe?
And why dark matter? Why not un-matter... I kind of like that. sounds a little more intriguing...

I hope this signal indicates first contact with another intelligence. We are not alone.

Hello, is it not possible that the idea is wrong with the "photon" being the only one in its group? how about an anti-photon and or an neutral photon or other kind of photons? Could his help explain the dark matter or in whatever it is...