In April 2019, scientists released the first image of a black hole in the galaxy M87 using the Event Horizon Telescope (EHT). This supermassive black hole weighs 6.5 billion times the mass of the sun and is located at the center of M87, about 55 million light-years from Earth.

The supermassive black hole is powering jets of particles that travel at almost the speed of light, as described in our latest press release. These jets produce light spanning the entire electromagnetic spectrum, from radio waves to visible light to gamma rays.

To gain crucial insight into the black hole's properties and help interpret the EHT image, scientists coordinated observations with 19 of the world's most powerful telescopes on the ground and in space, collecting light from across the spectrum. This is the largest simultaneous observing campaign ever undertaken on a supermassive black hole with jets. 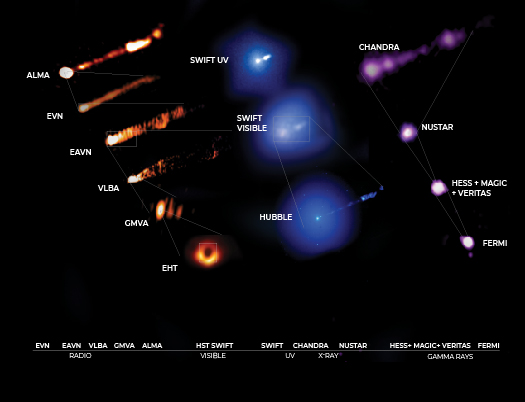 Beginning with the EHT's now iconic image of M87, a new video takes viewers on a journey through the data from each telescope. The video shows data across many factors of ten in scale, both of wavelengths of light and physical size. The sequence begins with the EHT image of the black hole in M87 released in April 2019 (the data was obtained in April 2017). It then moves through images from other radio telescope arrays from around the globe, moving outward in the field of view during each step. (The scale for the width of squares is given in light years in the bottom right hand corner).

Next, the view changes to telescopes that detect visible light (Hubble and Swift), ultraviolet light (Swift), and X-rays (Chandra and NuSTAR). The screen splits to show how these images, which cover the same amount of the sky at the same time, compare to one another. The sequence finishes by showing what gamma ray telescopes on the ground, and Fermi in space, detect from this black hole and its jet.

Throughout the sequence the smallest detail that the array or telescope can see increases in size by a large amount. For example the smallest details that the EHT, Chandra, and Fermi can see are 0.0067, 130 and 330,000 light-years respectively. Only the EHT can detect the black hole's shadow, and at the other extreme, Fermi is not able to determine whether the gamma ray emission it detects comes from regions close to the black hole, or from the jet.

The data were collected by a team of 760 scientists and engineers from nearly 200 institutions, 32 countries or regions, using observatories funded by agencies and institutions around the globe. The observations were concentrated from the end of March to the middle of April 2017.

The 2017 campaign involved a large number of observatories and telescopes. At radio wavelengths it involved: the European Very Long Baseline Interferometry (VLBI) Network (EVN) on May 9, 2017; the High Sensitivity Array (HSA), which includes the Very Large Array (VLA), the Effelsberg 100m antenna and the 10 stations of the National Radio Astronomy Observatory (NRAO) Very Long Baseline Array (VLBA) on May 15, 16 and 20; the VLBI Exploration of Radio Astronomy (VERA) over 17 different times in 2017; the Korean VLBI Network (KVN) over seven epochs between March and December; the East Asian VLBI Network (EAVN) and the KVN and VERA Array (KaVA) , over 14 epochs between March and May 2017; the VLBA on May 5, 2017; the Global Millimeter-VLBI-Array (GMVA) on March 30, 2017; the Atacama Large Millimeter/submillimeter Array (ALMA); the Submillimeter Array (SMA) as part of an ongoing monitoring program. At ultraviolet (UV) wavelengths it involved the Neil Gehrels Swift Observatory (Swift) with multiple observations between March 22 and April 20, 2017; and at optical wavelengths: Swift; and the Hubble Space Telescope on April 7, 12, and 17, 2017. (The Hubble data were retrieved from the Hubble archive because it was part of an independent observing program.) At X-ray wavelengths it involved the Chandra X-ray Observatory on April 11 and 14, 2017; the Nuclear Spectroscopic Telescope Array (NuSTAR) on April 11 and 14, 2017; and Swift. At gamma-ray wavelengths it involved Fermi from March 22 to April 20, 2017; the High Energy Stereoscopic System (H.E.S.S); the Major Atmospheric Gamma Imaging Cherenkov (MAGIC) telescopes, and the Very Energetic Radiation Imaging Telescope Array System (VERITAS).

The EHT Multi-wavelength (MWL) Working Group is a collective of EHT Collaboration members and external partners working together to ensure broadband MWL coverage during EHT campaigns, to maximize science output. The EHT collaboration involves more than 300 researchers from Africa, Asia, Europe, North and South America. The international collaboration is working to capture the most detailed black hole images ever obtained by creating a virtual Earth-sized telescope. Supported by considerable international investment, the EHT links existing telescopes using novel systems — creating a fundamentally new instrument with the highest angular resolving power that has yet been achieved.