The Search for a Jet from Sgr A* 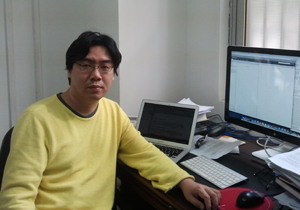 We are delighted to welcome a guest blog post from Zhiyuan Li, who led the work explained in our latest press release describing the best evidence yet for a jet from the supermassive black hole in our galaxy. Zhiyuan obtained his PhD at UMass/Amherst and did a postdoc at the Smithsonian Astrophysical Observatory. He went on to a Assistant Reseacher position at UCLA, where he worked with Prof. Mark Morris on the Sgr A* jet. He is currently a Professor of Astronomy at Nanjing University in China.

Today most astronomers believe that a supermassive black hole (SMBH), which weighs several million times more than the Sun, lurks at the very center of our Milky Way galaxy. The existence of such an entity was more just a speculation some 40 years back, when the two British astrophysicists, Donald Lynden-Bell and Martin Rees, first proposed the idea. Lynden-Bell and Rees suggested one particular observational test: "Very long baseline interferometry may soon be possible…to determine the size of any central black hole that there may be in our Galaxy" -- and they were right. There soon came the memorable discovery by Bruce Balick and Robert Brown, who in early 1974 used the Green Bank interferometer to find a compact radio source at the expected position. The source is now widely known as Sagittarius A* (Sgr A*) and accepted as the radio counterpart of the putative SMBH. (Most astronomers would use Sgr A* to denote the SMBH, and we do so below.) 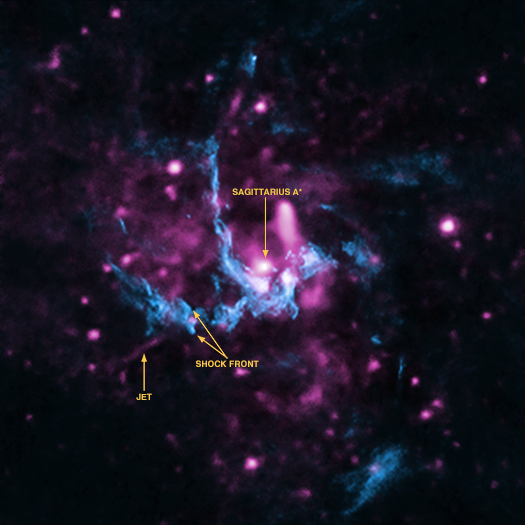 What exactly gives rise to the radio emission in Sgr A* took us a much longer time to understand. It is now a natural interpretation to many, if not most, astronomers that the radio waves trace the synchrotron radiation of a highly-collimated, magnetized outflow of relativistic particles (i.e., a jet) from Sgr A*. SMBHs grow their masses by continuously accreting from the ambient medium, and ample observations of distant SMBHs suggest that jets are symbiotic to the accretion process. Thus Sgr A* could be no exception in harboring a jet. However, such a scenario is not a certainty, owing to the non-detection of an elongated (i.e., jet-like) structure by very-long baseline interferometry observations peering into the immediate vicinity of Sgr A*.

Notwithstanding this fascinating puzzle, the surrounding interstellar space invites a search for signatures of a possible jet, where it could deposit some of its gigantic energy. But that could be a challenging task because (1) we don't have any a priori knowledge about the orientation of the jet, and (2) our view of the inner Galaxy is almost always complicated by the violent star-forming activities occurring in the Galactic center (GC) and a highly non-uniform, obscuring interstellar medium along the line-of-sight.

I learned the above picture during the past two years at UCLA, where I was an Assistant Researcher in the Physics and Astronomy Department, closely working with Prof. Mark Morris, a leading expert in the field of GC astrophysics. I had had some experience with X-ray observations of nearby galaxies, so I was interested in an X-ray study of the GC with Mark, using an unprecedented set of Chandra data acquired in a long-term effort led by Dr. Frederick K. Baganoff of MIT's Kavli Institute.

One day in the first week of May 2012, I walked into Mark's office for "continuing education" about the GC. This time Mark showed me a radio continuum image of Sgr A West (a three-armed gaseous structure orbiting Sgr A* within the inner few light years of the GC) and pointed me to a remarkable feature on the Eastern Arm -- in view of its morphology Mark has given this feature the name "Seagull Nebula", which we hope will survive. (Official astronomical names are only given by the International Astronomical Union, astronomers who discover features or objects often nickname them and sometimes they catch on with other astronomers and the general public.)

Mark speculated that the feature traces a shock front, although he (probably) hadn't had a clear clue on what drove the shock (nonetheless this to me was a great example of physical intuition). By then Mark had already told me about another intriguing feature seen in the Chandra X-ray image of the same region. That feature, given the rather boring name of G359.944-0.052 by its Galactic coordinates, exhibits a needle-shape and curiously points with its one end to the position of Sgr A*, which several years ago led Mark, Fred and others to suggest it could be a trace of the long-sought jet from Sgr A*. But just like their reaction to other jet proposals, the scientific community was not fully ready to buy this case. They wanted to see a more physical connection between Sgr A* and G359.944-0.052.

Sitting in front of Mark's monitor, I had the impression that the "Seagull" lies at a very similar position angle with respect to Sgr A* as G359.944-0.052. Thus I obtained a copy of the radio image from Mark and made a quick comparison with the Chandra image on my own computer. It turned out my guess was more than just right. A striking geometric relation appeared when I drew a straight line linking Sgr A* (essentially a point) and the "head" (mid-point) of the Seagull: the line naturally passes through the needle-like body of G359.944-0.052! Mark and I refused to take that as a mere coincidence but concluded there must be a physical relation among the three: an otherwise unseen jet from Sgr A* is interacting with gas in the GC, producing a shock front and, consequently, very energetic particles radiating synchrotron X-rays. Working out the details of this interaction ought to be straightforward, but in reality it took Mark, Fred and I more than a year to complete the story that the readers now see.

What are the implications of our finding? Plenty, and here I offer one that is far-reaching. The orientation of G359.944-0.052 now clearly tells us about the orientation of the jet axis, which, interestingly, coincides with the rotation axis of the Galactic disk. As the jet axis most likely follows the SMBH's spin axis, we may infer that the angular momentum of the SMBH has been coupled to that of the entire Galaxy, perhaps over a long time comparable to the age of the Universe. It would be very interesting to figure out the exact means of this coupling. But above all we are eager to see whether future observations, such as those afforded by the Event Horizon Telescope, may verify (or disprove) our jet proposal.