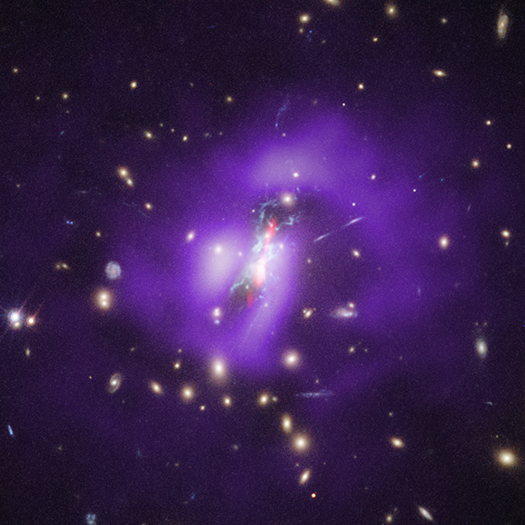 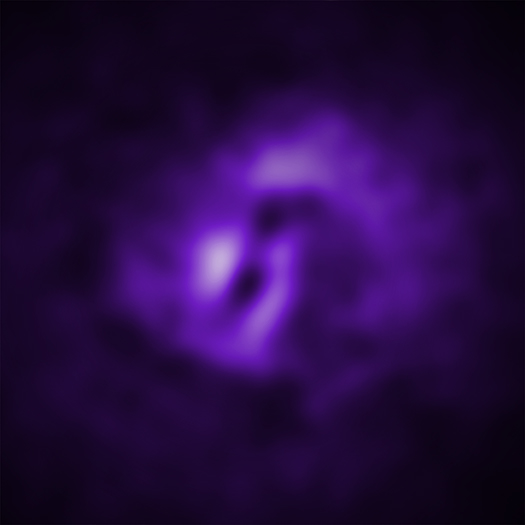 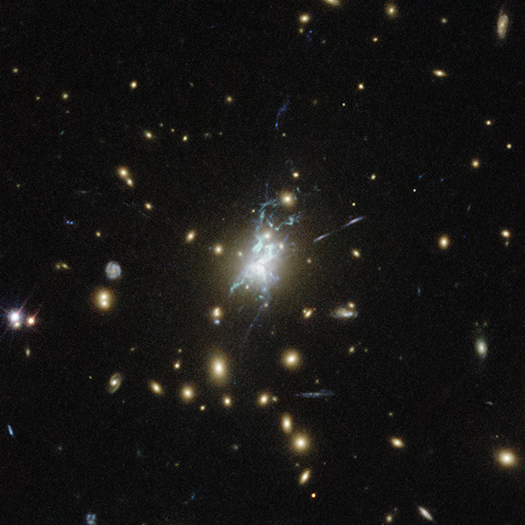 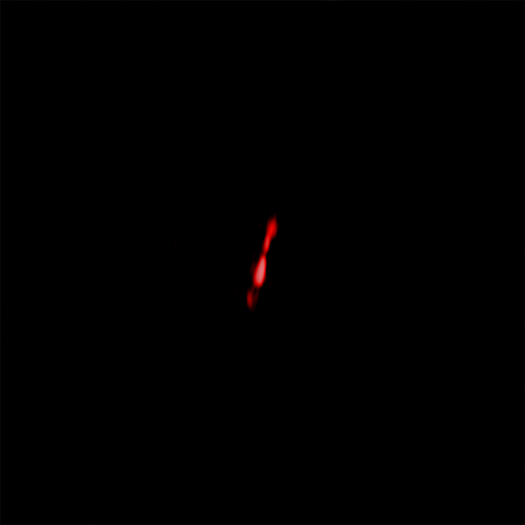 The Phoenix galaxy cluster contains the first confirmed supermassive black hole that is unable to prevent large numbers of stars from forming in the core of the galaxy cluster where it resides. This result, reported in our latest press release, was made by combining data from NASA's Chandra X-ray Observatory and Hubble Space Telescope, and the NSF's Karl Jansky Very Large Array (VLA). A new composite image shows data from each telescope. X-rays from Chandra depict hot gas in purple and radio emission from the VLA features jets in red. Optical light data from Hubble show galaxies (in yellow), and filaments of cooler gas where stars are forming (in light blue).

Galaxy clusters are the largest structures in the cosmos that are held together by gravity, and they consist of hundreds or even thousands of galaxies embedded in hot gas and invisible dark matter. The galaxies in their centers of clusters contain the largest supermassive black holes known. In the case of the Phoenix Cluster, the black hole in its core has a mass equivalent to 5.8 billion suns.

For decades, astronomers have found such giant black holes pumping out energy into their environment, which keeps the gas that surrounds them too warm to form many stars. Previous work has shown that the largest galaxies in the universe lack cool gas in their centers and have many fewer stars than expected. The Phoenix Cluster is an example that bucks this trend. Instead, astronomers discovered a relatively cool current of gas along which many stars are being born.

The Phoenix Cluster system has several distinct elements that help tell the story of its unusually high star formation. Data from Chandra show that the coolest gas it can detect is located near the center of the cluster. In the absence of significant sources of heat, astronomers expect cooling to occur at the highest rates in a cluster's center, where the densest gas is located.

Optical observations with Hubble provide evidence for further cooling of gas near the center of the Phoenix Cluster. Ten billion solar masses of cooler gas are located along filaments to the north and south of the black hole, which likely originate from outbursts by the supermassive black hole located in the center of the image. The outbursts generated jets seen in radio waves by the VLA, in two opposite directions. As the jets push outward, they inflated cavities, or bubbles, in the hot gas that pervades the cluster. Chandra's sharp X-ray vision detected these cavities.

Eventually the black hole's outburst that is responsible for these jets will generate turbulence, sound waves and shock waves (similar to the sonic booms produced by supersonic aircraft). This will in turn provide a source of heat and prevent further cooling, until the outburst ceases and the build-up of cool gas recommences. The whole cycle can then repeat.

A paper describing these results was published in a recent issue of The Astrophysical Journal, and a preprint is available online. NASA's Marshall Space Flight Center manages the Chandra program. The Smithsonian Astrophysical Observatory's Chandra X-ray Center controls science and flight operations from Cambridge and Burlington, Massachusetts.

More Images
Animation & Video
A Tour of
the Phoenix Cluster