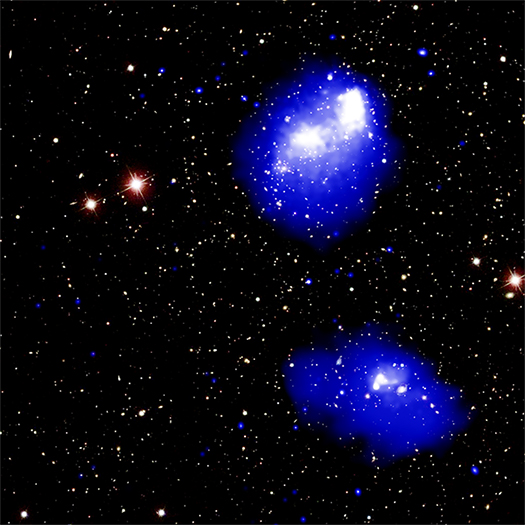 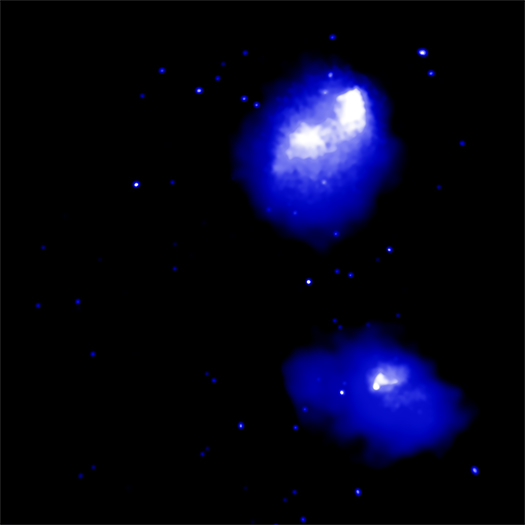 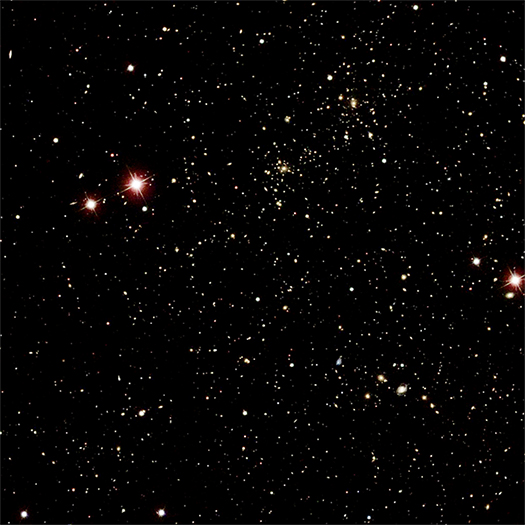 Astronomers using data from NASA's Chandra X-ray Observatory and other telescopes have put together a detailed map of a rare collision between four galaxy clusters. Eventually all four clusters — each with a mass of at least several hundred trillion times that of the Sun — will merge to form one of the most massive objects in the universe.

Galaxy clusters are the largest structures in the cosmos that are held together by gravity. Clusters consist of hundreds or even thousands of galaxies embedded in hot gas, and contain an even larger amount of invisible dark matter. Sometimes two galaxy clusters collide, as in the case of the Bullet Cluster, and occasionally more than two will collide at the same time.

The new observations show a mega-structure being assembled in a system called Abell 1758, located about 3 billion light-years from Earth. It contains two pairs of colliding galaxy clusters that are heading toward one another. Scientists first recognized Abell 1758 as a quadruple galaxy cluster system in 2004 using data from Chandra and XMM-Newton, a satellite operated by the European Space Agency (ESA).

Each pair in the system contains two galaxy clusters that are well on their way to merging. In the northern (top) pair seen in the composite image, the centers of each cluster have already passed by each other once, about 300 to 400 million years ago, and will eventually swing back around. The southern pair at the bottom of the image has two clusters that are close to approaching each other for the first time.

X-rays from Chandra are shown as blue and white, depicting fainter and brighter diffuse emission, respectively. This new composite image also includes an optical image from the Sloan Digital Sky Survey. The Chandra data revealed for the first time a shock wave — similar to the sonic boom from a supersonic aircraft — in hot gas visible with Chandra in the northern pair's collision. From this shock wave, researchers estimate two clusters are moving about 2 million to 3 million miles per hour (3 million to 5 million kilometers per hour), relative to each other.

Chandra data also provide information about how elements heavier than helium, the "heavy elements," in galaxy clusters get mixed up and redistributed after the clusters collide and merge. Because this process depends on how far a merger has progressed, Abell 1758 offers a valuable case study, since the northern and the southern pairs of clusters are at different stages of merging.

In the southern pair, the heavy elements are most abundant in the centers of the two colliding clusters, showing that the original location of the elements has not been strongly impacted by the ongoing collision. By contrast, in the northern pair, where the collision and merger has progressed further, the location of the heavy elements has been strongly influenced by the collision. The highest abundances are found between the two cluster centers and to the left side of the cluster pair, while the lowest abundances are in the center of the cluster on the left side of the image.

Collisions between clusters affect their component galaxies as well as the hot gas that surrounds them. Data from the 6.5-meter MMT telescope in Arizona, obtained as part of the Arizona Cluster Redshift Survey, show that some galaxies are moving much faster than others, probably because they have been thrown away from the other galaxies in their cluster by gravitational forces imparted by the collision.

A paper describing these latest results by Gerrit Schellenberger, Larry David, Ewan O'Sullivan, Jan Vrtilek (all from Center for Astrophysics | Harvard & Smithsonian) and Christopher Haines (Universidad de Atacama, Chile) was published in the September 1st, 2019 issue of The Astrophysical Journal, and is available online.

More Information
Blog: Witnessing the Formation of One of the Most Massive Objects in the Universe