50 Years Ago, NASA’s Copernicus Set the Bar for Space Astronomy

Submitted by chandra on Fri, 2022-08-19 11:55
With closed-captions (at YouTube)
This vintage segment on Copernicus comes from a 1973 edition of “The Science Report,” a long-running film series produced by the U.S. Information Agency. Credit: National Archives (306-SR-138B)

The following blog post is a special feature on the history of astrophysics and space science written by Francis Reddy, a public affairs specialist at NASA’s Goddard Space Flight Center. There is a brief summary of how X-ray astronomy, including the Chandra X-ray Observatory, and practically every other branch of astrophysics benefited from humanity’s success at launching objects into orbit. The original post is available on the NASA portal.

At 6:28 a.m. EDT on Aug. 21, 1972, NASA’s Copernicus satellite, the heaviest and most complex space telescope of its time, lit up the sky as it ascended into orbit from Launch Complex 36B at Cape Canaveral Air Force Station, Florida.

Initially known as Orbiting Astronomical Observatory (OAO) C, it became OAO 3 once in orbit in the fashion of the time. But it was also renamed to honor the upcoming 500th anniversary of the birth of Nicolaus Copernicus (1473 – 1543). The Polish astronomer formulated a model of the solar system with the Sun in the central position instead of Earth, breaking with 1,300 years of tradition and triggering a scientific revolution. 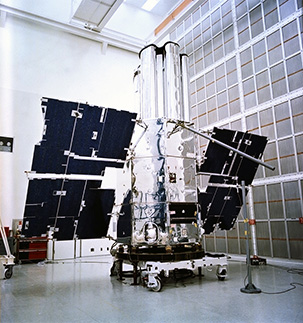 Orbiting Astronomical Observatory C – named Copernicus in orbit – stands in the Hangar AE clean room at Cape Canaveral Air Force Station, Florida, following the mounting of its stationary solar panels. Copernicus was the only member of the series sporting the large cylindrical structures at the top of the spacecraft, which kept stray light from reaching the instruments. Credit: NASA

Fitted with the largest ultraviolet telescope ever orbited to date as well as four co-aligned X-ray instruments, Copernicus was arguably NASA’s first dedicated multiwavelength astronomy observatory. This makes it a forebear of operating satellites like NASA’s Neil Gehrels Swift Observatory, which watches the sky in visible, ultraviolet, and X-ray light.

Learning to point and hold an orbiting telescope on a star long enough for the detectors to capture its light proved much more difficult than expected. Satellites designed to study the Sun at the time had a built-in advantage — they targeted the solar system’s brightest object. Copernicus flew with a new inertial reference unit (IRU) developed by the Massachusetts Institute of Technology. Gyroscopes in the IRU sped up the process of acquiring targets, while other systems kept the satellite locked on. In a study of the mission’s first 500 days, one engineer summed it up by noting that the IRU has made flying Copernicus “a boring operation.”

In NASA’s early days, astronomers emphasized the need for ultraviolet studies, which could not be made from the ground, and this became the primary focus of the OAO program. Of four satellites launched, one failed after three days in space and another failed to reach orbit at all. OAO 2, launched in 1968 and named Stargazer, provided years of observations, including low-resolution stellar spectra, which spread out wavelengths much like a rainbow to reveal the UV fingerprints of specific molecules and atoms. Copernicus went deeper still, capturing spectra with up to 200 times better detail in some wavelengths. 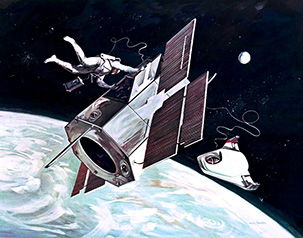 This mid-1960s illustration shows an astronaut servicing a future OAO satellite. Astronauts made orbital repairs to Skylab, NASA's first space station, in 1973 and to the Solar Maximum Mission satellite in 1984. But the vision illustrated here found its ultimate realization with the five successful missions to service and upgrade NASA's Hubble Space Telescope from 1993 to 2009. Credit: NASA

“This mission obtained high-resolution spectra of many stars in the UV and provided information at the shortest wavelengths reached for many years,” wrote Nancy Grace Roman, the first chief of astronomy in the Office of Space Science at NASA Headquarters, Washington, and the program scientist for Copernicus. During the mission, Roman became one the driving forces behind the Large Space Telescope project, now known as Hubble. She is also the namesake of NASA’s Roman Space Telescope, which is expected to take flight in a few years.

The primary instrument aboard Copernicus was the Princeton Experiment Package, which captured UV light using a 32-inch (0.8 meter) mirror about a third the size of Hubble’s. Led by Lyman Spitzer Jr. at Princeton University, the instrument produced a treasure trove of information about interstellar gas and the ionized outflows of hot stars. Its first target, a star named Zeta Ophiuchi that’s partly veiled by an interstellar cloud, showed strong absorption from hydrogen molecules. Measurements from dozens of other stars confirmed a theory predicting that most of the hydrogen in gas clouds existed in this form.

In 1946, Spitzer began speculating about the kinds of science that might be possible with a large orbiting telescope, later becoming the catalyst for the development of Hubble. NASA’s Spitzer Space Telescope, which operated from 2003 to 2020 and explored, among other sources, the cold clouds where stars are born, was named in his honor.

At the time when NASA was considering instrument proposals for Copernicus, only one celestial object, the Sun, was known to emit X-rays. That changed in 1962. Flying new X-ray detectors on a suborbital rocket, a research team led by Riccardo Giacconi at American Science and Engineering Inc., then in Cambridge, Massachusetts, discovered the first X-ray source beyond the solar system, named Scorpius X-1. Additional flights uncovered more cosmic sources, including Cygnus X-1, long suspected and now known to host a stellar-mass black hole. 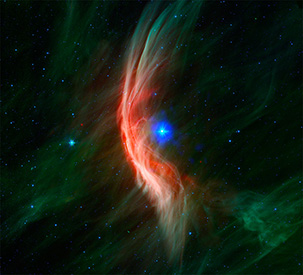 With this breakthrough, Giaconni proposed the first satellite dedicated to mapping the X-ray sky. Launched in 1970 and operating for three years, NASA’s Uhuru satellite mapped more than 300 sources, showed that many are neutron stars or black holes fueled by gas streaming from stellar companions, and discovered X-rays from the hot gas in galaxy clusters. Giaconni would go on to propose a more powerful X-ray satellite – NASA’s Einstein Observatory, which operated from 1978 to 1981 — and NASA’s current flagship, the Chandra X-ray Observatory, launched in 1999.

The three X-ray telescopes aboard Copernicus experienced significant challenges. Longer-wavelength detectors were swamped by an unexpectedly high level of background radiation. It proved to come from a vast comet-shaped cloud of hydrogen atoms surrounding Earth, called the geocorona, that scatter far-ultraviolet sunlight. Later instruments added a filter tuned to absorb the UV but let X-rays pass through.

In June 1973, scientists at Goddard noticed a problem with a shutter used in the X-ray telescopes. The device was used to periodically block X-rays from reaching the detector so scientists could track the changing background radiation from charged particles in different parts of the orbit. Now its operation had become hesitant. Concerned that the shutter might stick permanently in the closed position, the instrument team had decided to stop using it. But a final command made it through – and the sticky shutter stuck closed, blinding the instruments.

A fourth detector unattached to a telescope continued working for the duration of the mission. This X-ray counter measured radiation from 1 to 3 angstroms over a wide field of view — 2.5 by 3.5 degrees, about 40 times the apparent area of a full Moon.

The X-ray experiment discovered several long-period pulsars, including X Persei. Typically spinning neutron stars, pulsars had been discovered five years before Copernicus launched. These objects swing a beam of radiation in our direction each time they rotate, usually at tens to thousands of times a second. Oddly, the X Persei pulsar takes a leisurely 14 minutes per spin.

Copernicus performed long-term monitoring of other pulsars and bright sources, and observed Nova Cygni 1975, an explosion on the white dwarf in a close binary system. The experiment discovered curious dips in X-ray absorption at Cygnus X-1, likely caused by cool, dense clumps in the gas flowing away from the star. And the satellite recorded varying X-rays from the black-hole-powered galaxy Centaurus A, located about 12 million light-years away.

Copernicus returned UV and X-ray observations for 8.5 years before its retirement in 1981, and it still orbits Earth today. It departed space astronomy’s center stage as more advanced observatories appeared, notably Einstein and the International Ultraviolet Explorer, which launched in 1978 and operated for nearly 19 years. Copernicus observations appear in more than 650 scientific papers. Its instruments studied some 450 unique objects targeted by more than 160 investigators in the United States and 13 other countries.