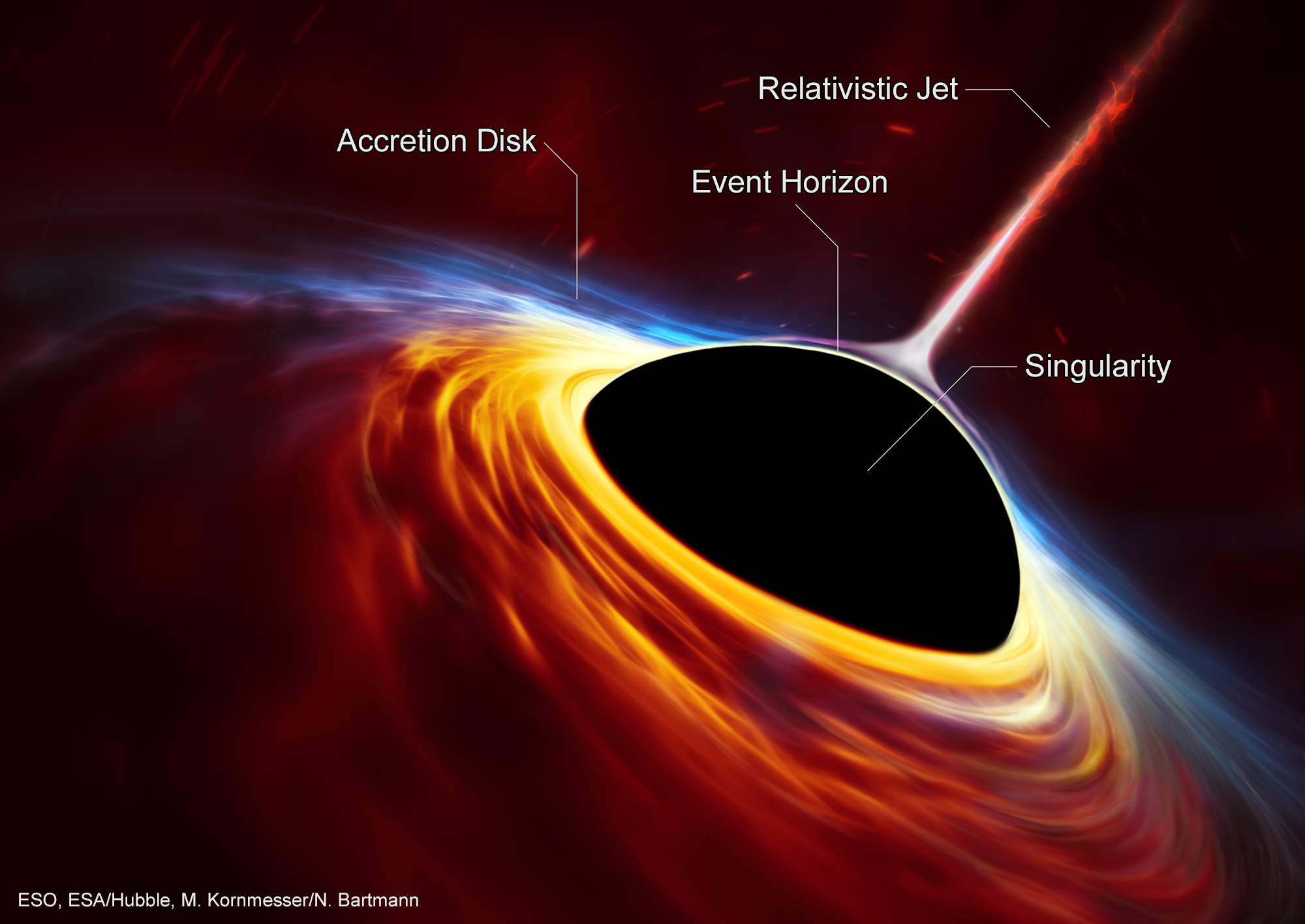 Recently, we put out a press release about the regular dining habits of a supermassive black hole. Not only was this black hole found to be consuming material, or "eating," it was doing so regularly, about once every nine hours. While scientists had found such regular eating habits of smaller, so-called stellar mass black holes, this is the first evidence of such behavior in the black hole giants that live at the centers of galaxies.

The lead author of the result, which used data from both NASA's Chandra X-ray Observatory and ESA's XMM-Newton, is Giovanni Minuitti of the Center for Astrobiology (CAB, CSIC-INTA) in Spain. Recently, he agreed to answer a series of questions about his work aimed at kids.

How would you explain a supermassive black hole to kids?

Let me start from the beginning.

Any object with mass (a planet, a star, a black hole, and even our own bodies) produces a force — gravity — attracting towards it any other body with mass. Gravity is a force that is proportional to the mass of the object that produces it, and that is stronger if you are closer. Basically, the higher the mass of the body and the closer to the body you are, the stronger the pull you feel.

So, if you sit on Earth's surface, you feel Earth's gravity that tends to pull you towards Earth center, although Earth's surface prevents you from "falling." Can you win over Earth's gravity and leave its surface? Yes, of course. You need a rocket that is powerful enough to give you a high enough velocity (which, in the case of our planet, is about 25,000 mph).

Humans did it many times: we went to the Moon, we sent probes to several planets of the Solar system and so on. The velocity that you need to win over gravity will depend on how much gravity there is, so it depends on the mass of the object you want to leave and on the distance you are from its center.

Now, let's talk about black holes. Black holes can be defined as the most compact objects we know of. That is, a lot of mass is concentrated in a very small volume (such as a sphere).

Imagine now that you are sitting on Earth's surface and that, without moving in space, you replace planet Earth with a black hole that has the same mass. The black hole will be very small. (Actually, it would be less than 1 inch across! As I said, a black hole is the most compact object we know of.) Real black holes are, in fact, much larger than that because they normally contain much more mass. At a minimum, black holes have a few times the mass of our Sun. But let's imagine that a black hole with the mass of the Earth can exist for a moment. It would indeed be less than 1 inch across.

Would the black hole pull you more than Earth was doing? Remember: same mass, same distance from the center. So the answer is NO! Gravity at the same distance is exactly the same, because the mass is the same. So, from that distance, you can still fly away from the black hole exactly as you did from Earth. You just need a rocket able to push you at 25,000 mph, as before. It is a lot, but we can do it.

What is the difference? The answer is the size. The black hole is tiny, and you don't have any more Earth's surface preventing you from "falling" towards it. Therefore, if you don't use your rocket immediately to fly away, you will fall down towards the black hole. And as the distance decreases, gravity will be stronger and stronger, and you'll need a more and more powerful rocket to fly away: the one you could use to leave Earth is no good anymore once you are closer to the black hole.

And then something special occurs — something that can only occur close to black holes. You reach a point (a distance) where no rocket can help you out. This is because the velocity you need to escape the black hole pull is equal to the velocity of light. And we know that nothing can go faster than light (that is a stunning 670,000,000 mph!). There is no rocket, nor will there ever be, that can give you a higher velocity than that. When you reach that point — called the black hole 'event horizon' — there is nothing that can be done, you are doomed and will fall into the black hole, as no escape is possible anymore.

We can now give perhaps a simple definition of a black hole: a black hole is an object so compact that it is surrounded by a mathematical surface (the event horizon) from within which nothing, not even light, can escape. What is inside? Who knows ... we may try to understand it mathematically but as nothing can escape from it, there is no signal that we can use to probe what is inside. So we actually don't know. Our knowledge stops at the event horizon. But from the effects that the black hole has on its surroundings, we can for example measure how much mass is contained inside the black hole, which is not bad.

You may ask: 'if nothing, not even light, can escape from a black hole, what is it that you are observing with your telescopes?'

It is a great question. In fact, we don't observe directly black holes, as they are black and do not emit any light (nor any other signal). However, sometimes, there is gas around black holes. And if this gas is close enough, it will experience what was described before, feeling the gravity pull of the black hole and falling towards it. Doing so it spirals in at higher and higher speed and gas heats up a lot in the process (reaching millions of degrees of temperature). Now, we all know that if you take a fork or whatever metal and heat it up a lot, it will start to shine first reddish and then yellow/whitish. What you see there is light emitted because the fork (or whatever) is hot. The same occurs around black holes: the gas heats up and emits light. This light is what we observe and use to infer lots of properties of black holes and their surroundings. 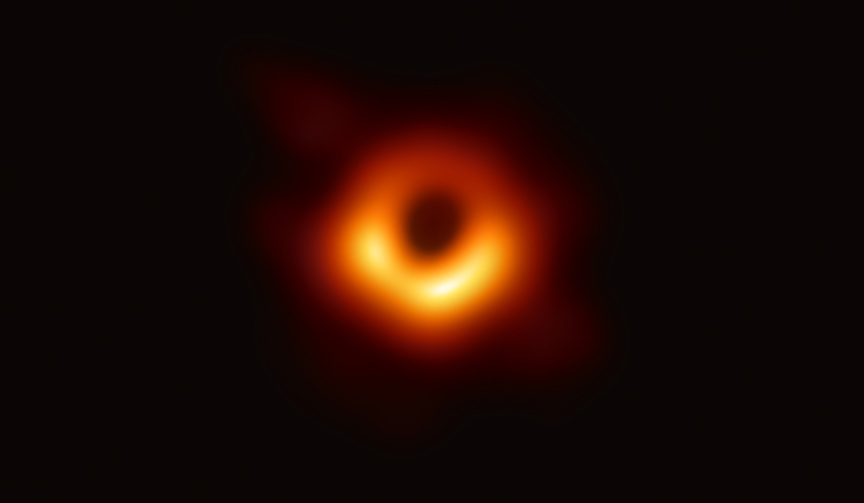 What were you and your team looking for when you were analyzing observations of the black hole?

The black hole we observed is located at the center of a galaxy called GSN 069. We had started studying this galaxy back in 2010 when we saw that the X-ray light from it suddenly increased a lot. We followed this with a few observations over the years and could see that the X-ray light emitted from this system was smoothly decreasing over the years. This likely signals that a star came too close to the black hole in the center of the galaxy (yes, we think that every galaxy has a super-massive black hole at its center) back in 2010 and was torn apart. Yes, I know I said before that you can approach the black hole a lot, but in fact you'd be most likely torn apart before reaching too close, sorry. The material from the disrupted star then started to fall into the black hole, to heat up and so to emit light.

In order to study this very special phenomenon, we decided to observe the light from this galaxy from time to time to better understand all that was going on over there.

How did you know it was consuming more matter?

The amount of energy that the gas spiraling in towards the black hole emits as light over a certain period of time is basically proportional (or related) to the amount of matter that falls in. This means by measuring how much light is emitted in a given period of time, we can estimate how much matter has been consumed during the very same period of time.

How did you react or feel when your team made the discovery? What were you thinking at the time?

I almost fell off my chair! It was so unexpected, so unprecedented! And, also, so rewarding. Never had anybody observed something like that from a black hole at the center of a galaxy. You feel a little bit as if the Universe is talking to you for a second. To you personally. Then, you quickly come out from your dreams and start to work hard trying to understand what is going on in that distant galaxy.

Actually, what WAS going on? As I said, light travels very very fast (670 million mph). But still, it takes time for light to cover a distance as its velocity is fast but not infinite. In the case of the galaxy we were studying, it takes about 250 million years for light emitted there to reach Earth. So, anything we observe now has actually occurred over there about 250 million years ago! Have a go at finding out what was happening here on planet Earth at that time.

When black holes at the center of galaxies are in their 'active' phase — that is when they "eat" some of the surrounding gas — they are among the most powerful sources of energy in the Universe.

They emit very large amount of light: in most cases the amount light emitted by the gas falling into the black hole is much more than that emitted by all the billions of stars of the galaxy. They also can eject vast amount of material in the form of "jets" and or gentler "winds". Scientists think this activity contributes very significantly to how galaxies form and evolve in the Universe. Therefore, it's very important for our understanding of how the Universe is, and how it came to be as it is now.

By studying the "diet" of black holes we try to understand all the phenomena that occur there and this has (and will) enabled us to make progress in many fields from astrophysics to fundamental physics to cosmology (not to mention the technological advances that are pushed forward by 'our' scientific needs).

This particular black hole we have studied shows such a new phenomenon that is highly likely to bring new physics, new knowledge, better understanding to the field.

What can children do if they're interested in things happening in space?

The first and most important thing is to be interested. In astronomy, in space science, but also in how animals behave, how plants grow, how climate changes, how a light bulb or a LED works ... Be curious, ask, look around. The rest is easy.