Chandra and the Event Horizon Telescope 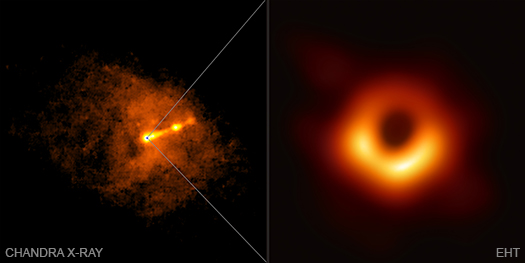 There are a lot of clichés that get thrown around when talking about big scientific discoveries. Words like “breakthrough” or “game changing” are often used. They grab people’s attention, but it’s fairly rare that they apply.

Today’s announcement of the first image ever taken of a black hole (more precisely, of its shadow) truly rises up to that standard. By definition, nothing not even light, can escape the gravitational grasp of a black hole. This, however, is only true if you get too close, and the boundary between what can and cannot get away is called the event horizon.

This dark portrait of the event horizon was obtained of the supermassive black hole in the center of the galaxy Messier 87 (M87 for short) by the Event Horizon Telescope (EHT), an international collaboration whose support includes the National Science Foundation. This achievement is certainly a breakthrough, and we at NASA’s Chandra X-ray Observatory congratulate and applaud the hundreds of scientists, engineers, and others who worked on the Event Horizon Telescope to obtain this extraordinary result.

As is well documented in today’s announcement, it took a remarkable effort and coordination from scientists and organizations around the world to even have a chance to make this happen. The result being heralded stems from an observing campaign during April 2017, when this global network of radio dishes observed M87 together.

But Chandra was not just a bystander! Rather, thanks to heroic efforts by schedulers at Chandra, EHT, and NASA’s Nuclear Spectroscopic Telescope Array (NuSTAR) mission, as well as by the EHT’s Multiwavelength Working Group, Chandra was used to observe M87 and other targets during the EHT campaign. While Chandra can’t see the shadow itself, its field of view is much larger than the EHT’s, so Chandra can view the full length of the jet of high-energy particles launched by the intense gravitational and magnetic fields around the black hole. This jet extends more than 1,000 light years from the center of the galaxy. 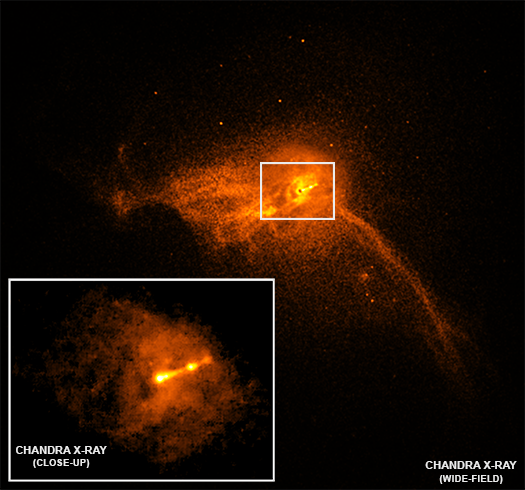 To use an analogy, consider a trumpeter in a concert hall: the EHT data, taken from radio telescopes around the globe, provide a close-up view of the mouthpiece (the origin of the sound, like the “central engine” of M87). The Chandra data, by contrast, reveal the sound waves as they travel down the trumpet and reverberate around the concert hall. (As with many analogies, the scale is not exact.) We need both of these pieces in order to understand the sound completely. (For a music analogy for interferometry and the EHT from the CfA’s Katie Bouman, see https://youtu.be/t5cSBmGkW3E).

As for the investigation of the black hole in M87, Chandra has been on the case for quite some time. First off, let’s start with some basics. M87 is an elliptical galaxy in the Virgo galaxy cluster, about 60 million light years away from Earth. For years, scientists have known that a supermassive black hole weighing several billion times the mass of the Sun sits at the center of M87.

Surrounding the elliptical galaxy is a reservoir of multimillion-degree gas, which glows brightly in X-ray light. Chandra's studies of this hot gas have given astronomers insight into the behavior and properties of the giant black hole. For example, astronomers have used Chandra data to discover ripples in the hot gas, which provide evidence for repeated outbursts from the black hole roughly every 6 million years or so. (As an aside and extension to the music analogy, these ripples represent sound waves in the hot gas. Since they are uneven, the “note” would likely be unharmonious noise rather than a melodic tone, many octaves below the threshold of human hearing.)

Given that Chandra has been a black hole explorer since its launch in 1999, it’s no surprise that astronomers would use it to augment the spectacular and difficult feat of taking an image of a black hole’s event horizon.

On behalf of the EHT’s Multiwavelength Working Group, Dr. Joey Neilsen of Villanova University and his collaborators put in a request for so-called Director’s Discretionary Time to observe M87 simultaneously with the EHT. While most Chandra observations are decided upon during a proposal and peer-review process, some time is allocated for unexpected or timely observations.

Chandra Director Belinda Wilkes awarded Neilsen and his colleagues nearly 30,000 seconds of observing time on M87 during April 2017. The hope was that the Chandra data could reveal whether M87 had a flare, or outburst, in X-rays during that time. Any X-ray variations might link temporally to what the EHT was seeing spatially close to the event horizon (i.e., in its images). Was material actively falling onto the black hole while the EHT was getting its revolutionary image? What was happening to energetic particles near and far from the event horizon during this time?

“Chandra’s X-ray observations coordinated with EHT represent an exciting opportunity to connect the dots between high-energy emission and the physics of accretion and ejection at the event horizon,” said Neilsen.

Neilsen, Villanova undergraduate student Jadyn Anczarski, and their collaborators used Chandra and NuSTAR to measure the X-ray brightness of the jet, a data point that EHT scientists used to compare their models of the jet and disk with the EHT observations.. Future questions the Chandra data may help explore include: How do black holes accelerate some particles to the very high energies that scientists have seen? How does the black hole produce the spectacular jets that Chandra and Hubble have studied for many years? Can data from Chandra and NASA’s NuSTAR observatory help play a role in determining more about the physics in this environment?

Scientists will be poring over the new EHT image and the papers that are being published in connection with this result for weeks, months, and even years to come. As they do, they will continue to pull in every resource they can — including famed black hole hunter, the Chandra X-ray Observatory — to learn as much as they can about these exotic and fascinating objects.

For more information, including images and videos: Chandra Captures X-rays in Coordination with Event Horizon Telescope

Do you have questions about this new result? Visit NASA's Chandra X-ray Observatory on Twitter (@chandraxray) with #EHTBlackHoleQ&A after the press conference at 10:30 am Eastern on April 10th for a live Question & Answer session with Dr. Joey Neilsen.