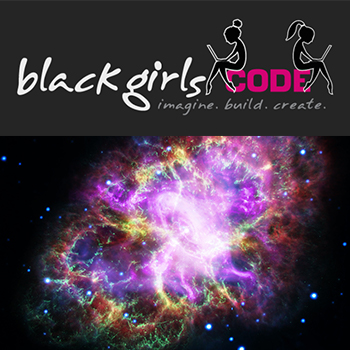 On Saturday, April 14, women and girls will gather in Brooklyn, NY, for a special STEM (science, technology, engineering, and mathematics) event. Black Girls Code, or BGC, is partnering with NASA’s Chandra X-ray Observatory to help girls and young women learn how astronomers and computer scientists use data to create images of our Universe in two and three dimensions.

This BGC event is the latest in the series of coding outreach programs developed by the Communications and Education group at the Chandra X-ray Center in Cambridge, Mass. The driving force for these efforts is Kimberly Arcand, who brings a computer science background to her role as Chandra’s Visualization lead, and her team of image processors, computer programmers and designers.

Chandra has consistently prioritized developing tools for non-experts to interact with and investigate data from Chandra, one of NASA’s “Great Observatories,” along with the Hubble Space Telescope and the Spitzer Space Telescope.

Starting in 2014, Arcand began to work with colleagues from Google and the American Astronomical Society to develop activities to help reach students who had no prior coding or computer science skills. This led to a suite of open source Pencil Code-based activities, where students can work directly with real NASA data to create images of exploded stars and areas around black holes. 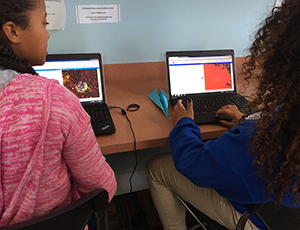 Partnering with organizations such as Code.org and Girls Who Code, Arcand and her team have been able to expand the reach of the original activity from hundreds of users to tens of thousands by accessing Hour of Code and similar networks. Arcand has also implemented new and complementary programs, such as pencil and paper based activities if no computers are available, programs that include 3D modeling of astronomical data sets, 3D printed data sets for the blind and visually impaired, and most recently, Virtual Reality discussions and demonstrations to connect across the data processing pipeline.

It has been 20 years since Chandra was launched from the Space Shuttle Columbia by the first female Shuttle commander, and today Chandra’s Director is the first woman to ever lead one of NASA’s Great Observatories. While great progress has been made, clearly there is much to be done. The Chandra X-ray Center will continue to work toward inspiring and enabling the next generation of STEM professionals in as many ways as we can.

In 2016, Chandra collaborated with STScI, JPL, IPAC and Sonoma State University to propose the Universe of Learning (UoL) program and was awarded funding from NASA’s SMD Science Activation Collaborative. This funding allowed Chandra to further elaborate on this earlier work and to expand opportunities for new audiences such as Black Girls Code.

We look forward to seeing some of you on Saturday, April 14th in Brooklyn at Black Girls Code, or at one of our future coding events!

More information, including how to register, for the April 14th event can be found at https://www.eventbrite.com/e/black-girls-code-new-york-chapter-presents-coloring-coding-the-universe-with-nasa-tickets-44501186246?aff=erelexpmlt