ULX in M51: Beaming with the Light of Millions of Suns 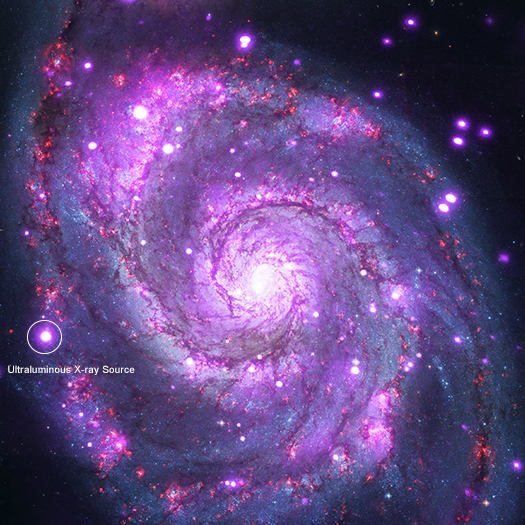 ULX in M51, the Whirlpool Galaxy

In the 1980s, scientists started discovering a new class of extremely bright sources of X-rays in galaxies. These sources were a surprise, as they were clearly located away from the supermassive black holes found in the center of galaxies. At first, researchers thought that many of these ultraluminous X-ray sources, or ULXs, were black holes containing masses between about a hundred and a hundred thousand times that of the sun. Later work has shown some of them may be stellar-mass black holes, containing up to a few tens of times the mass of the sun.

In 2014, observations with NASA's NuSTAR (Nuclear Spectroscopic Telescope Array) and Chandra X-ray Observatory showed that a few ULXs, which glow with X-ray light equal in luminosity to the total output at all wavelengths of millions of suns, are even less massive objects called neutron stars. These are the burnt-out cores of massive stars that exploded. Neutron stars typically contain only about 1.5 times the mass of the sun. Three such ULXs were identified as neutron stars in the last few years. Scientists discovered regular variations, or "pulsations," in the X-ray emission from ULXs, behavior that is exhibited by neutron stars but not black holes.

Now, researchers using data from NASA's Chandra X-ray Observatory have identified a fourth ULX as being a neutron star, and found new clues about how these objects can shine so brightly. The newly characterized ULX is located in the Whirlpool galaxy, also known as M51. This composite image of the Whirlpool contains X-rays from Chandra (purple) and optical data from the Hubble Space Telescope (red, green, and blue). The ULX is marked with a circle.

Neutron stars are extremely dense objects — a teaspoon would weigh more than a billion tons, as much as a mountain. The intense gravity of the neutron stars pulls surrounding material away from companion stars, and as this material falls toward the neutron star, it heats up and glows with X-rays. As more and more matter falls onto the neutron star, there comes a time when the pressure from the resulting X-ray light becomes so intense that it pushes the matter away. Astronomers call this point — when the objects typically cannot accumulate matter any faster and give off any more X-rays — the Eddington limit. The new result shows this ULX is surpassing the Eddington limit for a neutron star. 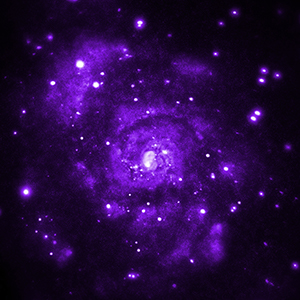 The scientists analyzed archival X-ray data taken by Chandra and discovered an unusual dip in the ULX's X-ray spectrum, which is the intensity of X-rays measured at different wavelengths. After ruling out other possibilities, they concluded that the dip was likely from a process called cyclotron resonance scattering, which occurs when charged particles — either positively charged protons or negatively charged electrons — circle around in a magnetic field. The size of the dip in the X-ray spectrum, called a cyclotron line, implies magnetic field strengths that are at least 10,000 times greater than those associated with matter spiraling into a stellar-mass black hole, but are within the range observed for neutron stars. This provides strong evidence that this ULX is a neutron star rather than a black hole, and is the first such identification that did not involve the detection of X-ray pulsations.

If the cyclotron line is from circling electrons, by contrast, then the magnetic field strength around the neutron star would be about 10,000 times less strong, and thus not powerful enough for the flow onto this neutron star to break the Eddington limit.

The researchers currently don't have a spectrum of the new ULX with enough detail to determine the cyclotron line's origin. To further address this mystery, the researchers are planning to acquire more X-ray data on the ULX in M51 and look for cyclotron lines in other ULXs.