Pathways to the Stars -- II 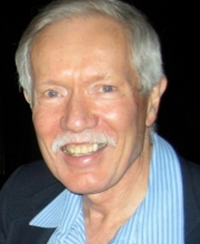 (A continuing series on how astrophysicists’ varied career paths. Pathways to the Stars -- I)

Jeff McClintock is recognized around the world as one the pre-eminent experts on black holes. In 2009, he shared the American Astronomical Society’s prestigious Bruno Rossi prize, along with Ron Remillard and Charles Bailyn for his work on the measurement of the masses of black holes.

McClintock has also served on the board of directors for the Giant Magellan Telescope, a telescope under construction that when it is commissioned in 2022, will be the largest optical telescope in existence. As it turns out, Jeff has been interested in large telescopes for a long time, going back to his childhood in Port Orchard, Washington.

McClintock mailed in his dollar, and received two lenses in the mail.

“That was it. Two lenses. I inserted the lenses at the ends of a discarded 8-foot cardboard tube which had been used to store linoleum."

He didn’t have a mount for his telescope, so he put it on several chairs in the living room, and looked through it, at some lights across Port Orchard strait near Seattle.

“I could see blue lights across the bay, and read a sign. It was upside down! I took it up to the attic and looked at the moon. I was blown away!”

Inspired by the view of the craters on the moon, McClintock built a second telescope, a 6” reflector.

“I ground the mirrors, and won a state science fair with this one. At the fair, I also showed how to make a telescope mirror by spinning a dish of mercury on a phonograph.” 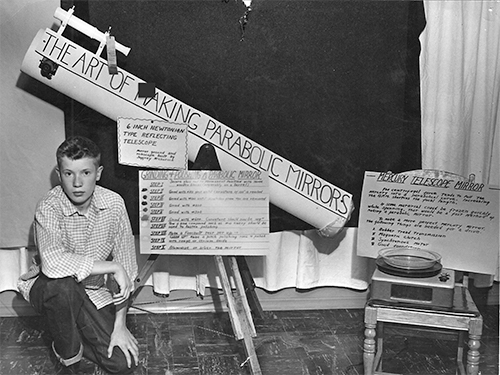 Jeff McClintock as youth at the Washington state science fair

“I bought a 4-inch refractor lens and built a third telescope. I wanted to make an equatorial mount.”

A telescope needs to be held steady so that it can focus on the same point in the sky. The mechanical structure that does this is called a telescope mount. One of the simplest types of mounts is the altazimuth mount, which allows a telescope to be moved up and down (altitude), or sideways (azimuth) in separate motions. This type of mount is used in standard camera tripods, and inexpensive telescopes.

However, the altazimuth mount does not allow for simple tracking of a planet, star or nebula in the night sky. In contrast, an equatorial mount is designed to make it easy to follow stars as the rotation of the Earth moves their position across the sky. An equatorial mount allows the telescope to be moved sideways in an arc (called Right Acension) that corresponds to the rotation of the Earth, and therefore the apparent motion of the stars. The other motion moves the telescope in latitude from the equator to the pole (Declination). A celestial object can be easily tracked in the course of the night by turning the Right Ascension controls on the telescope instead of two. Another advantage is that the celestial coordinates of astronomical objects are listed in atlases by their Right Ascension and Declination, so it easier to locate them with an equatorial mount.

That being said, with the advent of digital tracking systems, altazimuth mounts have come back into favor for both amateurs and professionals because of their simpler design.

About that time, McClintock read a story in a Seattle paper about Luther Hawthorne, who claimed that a meteorite had crashed through the dome of his private observatory in Kirkland, a suburb east of Seattle. 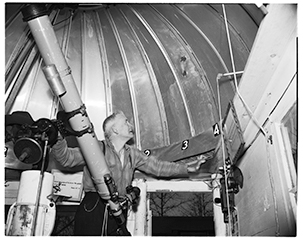 Luther Hawthorne at his telescope

“I got his phone number, and called him,” McClintock said. “He answered, ‘Hawthorne here at the pearly gates!’”
They arranged to meet. McClintock, who was 13 years old at the time, took a ferry to Bremerton, then another ferry from Bremerton to Seattle, then a bus to Kirkland — a trip that took most of the day — where Hawthorne met him.
“He had an old De Soto,” McClintock recalled. “He picked me up at the bus station, and drove me up the mountain. His health was wrecked with effects of diabetes. His eyesight was very bad, he had a hook in place of his left hand, and a wooden leg. He went off the road several times. Everybody on the road knew him by sight and would give him a wide berth.”
“It turned out that he had faked the meteorite strike on his observatory. He said he had been a professor, too, and I guess that wasn’t true, either. But he had been a machinist at Ford, and he had all kinds of tools.”

One of them was a metal lathe, that according to McClintock, could “peel off metal like it was a potato skin. I had never seen anything like it.” 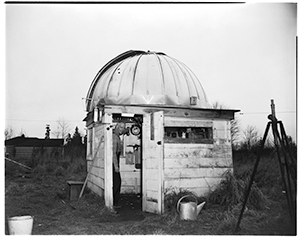 And then there was his observatory, which had a 6-inch refracting telescope. When I was a kid I thought I had gone to the greatest observatory in the world.”

Hawthorne agreed to help McClintock build his equatorial mount, and for the next nine months McClintock would make the two ferry rides plus the bus ride to Kirkland. He walked the remaining three miles to Hawthorne’s place because, even as a 13-year old, he judged that it was too risky to chance another ride up the hill with him.

Working together, they fashioned a mount from pipe fittings and bronze rods. In the evening, they would look through Hawthorne’s telescope and Hawthorne would tell McClintock stories about the mountains on the moon and other astronomical wonders.

When they were finished, McClintock loaded the equatorial mount in his backpack, said goodbye, walked down the hill, caught the bus, and two ferries back home. He also carried a gift from Hawthorne: a nameplate elegantly inscribed with McClintock’s name.

The nameplate has adorned the door of McClintock’s offices at MIT and Harvard-Smithsonian for decades, a reminder of a magical time, and a priceless gift: 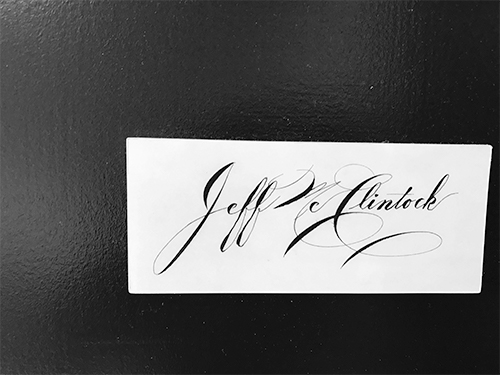 Nameplate given to McClintock by Luther Hawthorne

“Old Hawthorne somehow knew how to make the world around him awash in wonder,” McClintock recalled, “in a way that no school anywhere ever did for me.”

Considering that McClintock got a Bachelor of Science degree from Stanford, and a Ph.D. from MIT, and has had a stellar career as an astrophysicist at MIT and the Harvard-Smithsonian Center for Astrophysics for 40-plus years, that’s a compliment of cosmic proportions to “Old Hawthorne.”

Interviews with Jeff McClintock at the Harvard Smithsonian Center for Astrophysics in May, 2016, and subsequent email correspondence.

Carol Smith, October 4, 2016 "How a local boy found his destiny in the stars," Seattle Post-Intelligencer in
http://seattlepi.nwsource.com/local/287477_starman04.html

2007 Aug 8, "On Black Hole-Ness: Taking Pleasure in the Dimness of Stars," Chandra Chronicles (by WKT)
http://chandra.si.edu/chronicle/0307/onbh/index.html

Category:
Career Development
Subcategory:
Meet an Astronomer
Disclaimer: This service is provided as a free forum for registered users. Users' comments do not reflect the views of the Chandra X-ray Center and the Harvard-Smithsonian Center for Astrophysics.
Please note this is a moderated blog. No pornography, spam, profanity or discriminatory remarks are allowed. No personal attacks are allowed. Users should stay on topic to keep it relevant for the readers.
Read the privacy statement