X-rays From the Young Monsters: Studying Supermassive Black Holes in the Early Universe 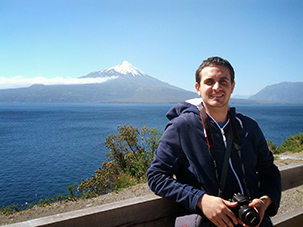 We are pleased to welcome Fabio Vito as our guest blogger. Fabio and his colleagues led some of the latest work involving the Chandra Deep Field-South that were presented at the 229th meeting of the American Astronomical Society in January 2017. He obtained a Ph.D. degree in Astrophysics and Cosmology from the University of Bologna (Italy) in 2014. During his studies he collaborated with researchers from the Astronomical Observatory of Bologna and also spent a 6-months period at the University of Cambridge (UK). After one year in a postdoctoral position in Bologna, he moved to his current position as a postdoctoral researcher at the Pennsylvania State University. Fabio's work is mainly focused on the growth and evolution of supermassive black holes in the early Universe, exploiting some of the deepest X-ray data available.

Black holes are among the most fascinating objects in the Universe. Probably most people have at least heard about them, maybe reading about some pseudo-scientific speculations like wormholes, time travelling, etc. Or perhaps they have watched movies such as the famous 2014 movie "Interstellar", or even by listening to music, such as the "Supermassive Black Hole" song by the British band Muse.

However, despite their popularity, our knowledge of these monsters of the Universe is limited. We know that "normal" black holes (although nothing is normal about black holes), which have masses of a few to tens of times the Sun's mass, are formed when big stars die and explode as supernovas. However, there is more than just one type of black hole. At the centers of most galaxies, there is a "monster among the monsters." This is what astronomers call a supermassive black hole (SMBH), and they can weigh from millions to billions of solar masses. Despite the fact that almost all of the normal-sized galaxies in the Universe host a SMBH in their centers (even our Milky Way!), astronomers do not know when and how they formed.

When SMBHs grow by accreting nearby gas, huge amounts of radiation are emitted, and astronomers call these objects "active galactic nuclei" (AGN). X-rays, in particular, are very sensitive to this process and can be used to identify these growing monsters.

The Chandra X-ray Observatory has been used over 15 years or so to observe a small area of the sky with the size of about two-thirds of the full Moon. This project is called the Chandra Deep Field-South (CDF-S). The total exposure time in this field is about 7 millions of seconds (more than two months!) making it the patch of the sky covered by the most sensitive X-ray data in existence. Still, this is not enough to detect and study the faintest AGN.

Recently, we used a technique called "X-ray stacking" to increase the sensitivity of the available data. The basic concept is to treat each galaxy as a representation of an ideal, "average" galaxy. Summing the X-ray data at the positions of a sample of galaxies, one can therefore dramatically increase the effective exposure time and study the average emission in distant (more than 10 billion light years away) galaxies, which are too faint to be detected individually in the X-rays. Applying this technique to the CDF-S data, we could reach effective exposure times of up to 8 billion seconds, which correspond to about 250 years of Chandra time. It is like we observed with Chandra an average galaxy between 1.5 and 2 billion years after the Big Bang continuously for more than two centuries!

Comparing the results with theoretical predictions and previous results, we found that the average X-ray emission in distant galaxies that couldn't be detected individually is probably mostly due to stellar-mass black holes, and not to matter falling onto SMBHs. This means that SMBH growth in distant galaxies happens prevalently in short bursts of fast growth, traced by a luminous AGN phase, while the possible continuous, low-rate accumulation of material, which would produce a fainter X-ray emission, is probably negligible for the overall mass building of SMBHs.

Our research also allowed us to put the first observational constraints on the low-luminosity tail of the so-called "X-ray luminosity function" of distant AGN. This is a physical quantity that measures the number of AGN at different luminosities and cosmic epochs, and is crucial both for understanding SMBH growth in the Universe and to get hints about how these monsters formed.

New and better data are needed to confirm these results and push our knowledge of SMBH formation and growth forward. In particular, new instruments, telescopes and observatories in the next decades will provide us with deeper X-ray observations over larger areas of sky. One of these missions, ATHENA, is an ESA X-ray space observatory that is expected to launch in 2028. Another one is the NASA-led mission Lynx (a.k.a. X-ray Surveyor), which is currently still in the designing phase. The Chandra observatory is luckily still in good shape and can be used to pave the way to the advent of such heirs.