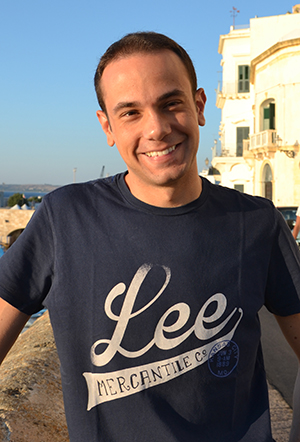 It is a pleasure to welcome Fabio Pacucci as a guest blogger. Fabio led the study that is the subject of our latest press release. He is going to defend his Ph.D. Thesis at the Scuola Normale Superiore in Pisa (Italy), under the supervision of Andrea Ferrara. During his Ph.D. he spent several months at the Institute d’Astrophysique de Paris (IAP) in France, Yale University and Harvard University in the USA. In September he is starting his first postdoctoral position at Yale University. Fabio has mainly been working on understanding the properties of the first black hole seeds, formed when the Universe was less than one billion years old.

It was a sunny and hot afternoon in Pisa when Andrea Ferrara, my Ph.D. supervisor, suggested that I study the first black holes formed in the Universe. This topic is among the most interesting in cosmology. We know that almost every galaxy hosts a supermassive black hole (SMBH) at its center. In the Milky Way there is a black hole about 4 million times more massive than the Sun, but objects up to 10 billion times the mass of the Sun have also been observed.

A problem arises because we observe the same, monstrous, objects during the infancy of the Universe. The "billion (dollar) problem" is the following: how did it happen that SMBHs a billion times more massive than the Sun were in place when the Universe was less than one billion years old? We know how relatively small black holes − those up to 100 times more massive than the Sun – form in the early Universe, from the collapse of massive stars. They then need time to grow up, swallowing gas or merging with other objects. However, current growth theories cannot explain the rapid growth required to create a one-billion-solar-mass black hole in such a short period of time. If someone invites you home to meet a new puppy dog, and the following day you find a gigantic hound chasing you down the porch, something must be wrong.

The problem is to understand how the first black holes, the "seeds" that gave rise to the observed SMBHs, formed during the early Universe about 13 billion years ago. The first black holes, like the first stars, formed during the dark ages, a period of cosmic evolution during which there was no visible light. In other words, the building blocks of the Universe slowly formed in the darkness.

Two classes of solutions to the problem of forming giant black holes in the very early Universe have been suggested. Seeds of the first black holes either formed “normal-sized and grew fast” or formed “big and grew normally.” In the first scenario, a black hole of normal size (up to 100 times the Sun’s mass) is born and then grows up very rapidly, breaking the "growth speed limit," named the Eddington limit, which is the maximum growth rate allowed by standard models. The second scenario foresees the possibility that, in the early Universe, massive black hole seeds could form that were up to 100,000 times the mass of the Sun, without fragmenting the gas into a plethora of smaller objects, i.e. stars. Then these seeds would grow up without breaking the Eddington limit.

One possible way to build up such massive objects is through the direct collapse black hole (DCBH) scenario. These intermediate-mass black holes would represent the missing link between the small ones, formed at the end of the evolution of massive stars, and the giant ones, found at the center of galaxies. DCBHs have been hypothesized by astrophysicists, but never detected so far. We focused our research on this scenario. 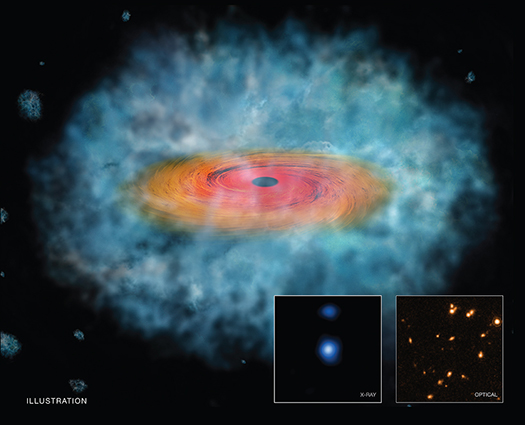 For this study, we built a code (called “GEMS”, which stands for Growth of Early Massive Seeds) that predicts the amount of radiation emitted by the region around a black hole at different wavelengths, in other words its spectrum. We were then able to predict the observational features of these objects, which started to shine in the early Universe, as gems in the middle of darkness. Soon after the code was ready, we read a study about an object named CR7, an early galaxy with a peculiar spectrum. The authors suggested that it might have hosted the first population of stars formed in the Universe. With our model, we showed that its observational properties might also be explained by assuming that this galaxy hosts a DCBH. This possibility was confirmed by several independent studies. CR7 is a good DCBH candidate, but it shows no X-ray emission, which is a typical indicator of objects powered by material falling onto a black hole. Hence, deeper X-ray observations will be needed to assess the nature of this source.

We wanted to extend the scope of our quest for the first black holes, employing large databases of objects. But how should we choose possible DCBHs among the thousands of objects contained in these surveys? The answer was to use their colors. Just as in everyday life, a "color" compares the emission of an object in different parts of the electromagnetic spectrum. Measuring the colors of a source is much simpler than measuring the full spectrum. Hence, we were able to compare our predictions for the colors of DCBHs with a large zoo of distant sources. We chose three bands through which to compute the colors of DCBHs, observable with NASA's Spitzer Space Telescope and Hubble Space Telescope (HST). In these bands, we predicted that DCBHs should appear much redder than other objects observable in the early Universe. Their redness is caused by the huge amount of gas present in their host galaxies: photons emitted by the black hole lose energy while trying to escape.

We tested our method with a large database of galaxies, using the Cosmic Assembly Near-infrared Deep Extragalactic Legacy Survey (CANDELS) and the Great Observatories Origins Deep Survey-South (GOODS-S) surveys. Several scientists from the National Institute for Astrophysics (INAF) in Rome provided the data and fundamental help with its analysis: Andrea Grazian, Fabrizio Fiore, Emanuele Giallongo and Simonetta Puccetti. We selected two objects, formed when the Universe was younger than one billion years, which may be the first DCBHs ever detected. These objects, imaged by Spitzer and HST, are also clearly detected by NASA’s Chandra X-ray Observatory. Hence, they are very likely associated with growing black holes and not only made of stars, as previously assumed.

If this discovery is confirmed, it would represent a breakthrough in our knowledge of the early Universe. These black holes would be the direct ancestors of the giant ones we ubiquitously observe in nearby galaxies. Further observations on these two objects are already planned, as well as the extension of our analysis to other surveys. So far, we have shown that "all that glitters in the early Universe is not necessarily made of stars". Anyway, the quest for the first black holes formed in the Universe is far from being completed.

Category:
Black Holes
Cosmology/Deep Field
Disclaimer: This service is provided as a free forum for registered users. Users' comments do not reflect the views of the Chandra X-ray Center and the Harvard-Smithsonian Center for Astrophysics.
Please note this is a moderated blog. No pornography, spam, profanity or discriminatory remarks are allowed. No personal attacks are allowed. Users should stay on topic to keep it relevant for the readers.
Read the privacy statement