More Than Meets the Eye: Delta Orionis in Orion's Belt 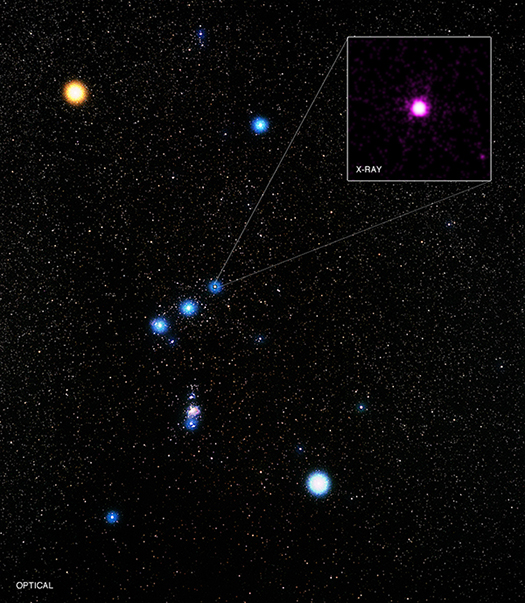 One of the most recognizable constellations in the sky is Orion, the Hunter. Among Orion's best-known features is the "belt," consisting of three bright stars in a line, each of which can be seen without a telescope.

The westernmost star in Orion's belt is known officially as Delta Orionis. (Since it has been observed for centuries by sky-watchers around the world, it also goes by many other names in various cultures, like "Mintaka".) Modern astronomers know that Delta Orionis is not simply one single star, but rather it is a complex multiple star system.

Delta Orionis is a small stellar group with three components and five stars in total: Delta Ori A, Delta Ori B, and Delta Ori C. Both Delta Ori B and Delta Ori C are single stars and may give off small amounts of X-rays. Delta Ori A, on the other hand, has been detected as a strong X-ray source and is itself a triple star system as shown in the artist's illustration.

In Delta Ori A, two closely separated stars orbit around each other every 5.7 days, while a third star orbits this pair with a period of over 400 years. The more massive, or primary, star in the closely-separated stellar pair weighs about 25 times the mass of the Sun, whereas the less massive, or secondary star, weighs about ten times the mass of the Sun.

The chance alignment of this pair of stars allows one star to pass in front of the other during every orbit from the vantage point of Earth. This special class of star system is known as an "eclipsing binary," and it gives astronomers a direct way to measure the mass and size of the stars.

Massive stars, although relatively rare, can have profound impacts on the galaxies they inhabit. These giant stars are so bright that their radiation blows powerful winds of stellar material away, affecting the chemical and physical properties of the gas in their host galaxies. These stellar winds also help determine the fate of the stars themselves, which will eventually explode as supernovas and leave behind a neutron star or black hole.

By observing this eclipsing binary component of Delta Orionis A (dubbed Delta Ori Aa) with NASA's Chandra X-ray Observatory for the equivalent of nearly six days, a team of researchers gleaned important information about massive stars and how their winds play a role in their evolution and affect their surroundings. The Chandra image is seen in the inset box in context with an optical view of the Orion constellation obtained from a ground-based telescope.

Since Delta Ori Aa is the nearest massive eclipsing binary, it can be used as a decoder key for understanding the relation between the stellar properties derived from optical observations, and the properties of the wind, which are revealed by X-ray emission.