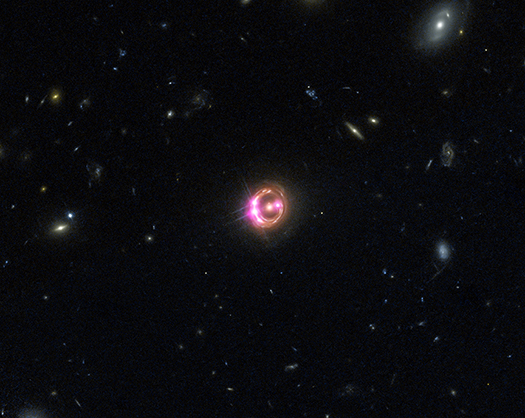 Multiple images of a distant quasar are visible in this combined view from NASA's Chandra X-ray Observatory and the Hubble Space Telescope. The Chandra data, along with data from ESA's XMM-Newton, were used to directly measure the spin of the supermassive black hole powering this quasar. This is the most distant black hole where such a measurement has been made, as reported in our press release.

Gravitational lensing by an intervening elliptical galaxy has created four different images of the quasar, shown by the Chandra data in pink. Such lensing, first predicted by Einstein, offers a rare opportunity to study regions close to the black hole in distant quasars, by acting as a natural telescope and magnifying the light from these sources. The Hubble data in red, green and blue shows the elliptical galaxy in the middle of the image, along with other galaxies in the field.

The quasar is known as RX J1131-1231 (RX J1131 for short), located about 6 billion light years from Earth. Using the gravitational lens, a high quality X-ray spectrum - that is, the amount of X-rays seen at different energies - of RX J1131 was obtained.

The authors of the new study found that the X-rays are coming from a region in the disk located only about three times the radius of the event horizon, the point of no return for infalling matter. This implies that the black hole must be spinning extremely rapidly to allow a disk to survive at such a small radius.