The Remarkable Remains of a Recent Supernova 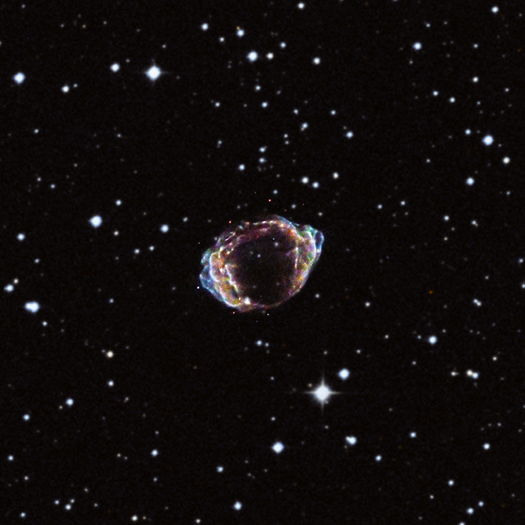 Astronomers estimate that a star explodes as a supernova in our Galaxy, on average, about twice per century. In 2008, a team of scientists announced they discovered the remains of a supernova that is the most recent, in Earth's time frame, known to have occurred in the Milky Way.

The explosion would have been visible from Earth a little more than a hundred years ago if it had not been heavily obscured by dust and gas. Its likely location is about 28,000 light years from Earth near the center of the Milky Way. A long observation equivalent to more than 11 days of observations of its debris field, now known as the supernova remnant G1.9+0.3, with NASA's Chandra X-ray Observatory is providing new details about this important event.

The source of G1.9+0.3 was most likely a white dwarf star that underwent a thermonuclear detonation and was destroyed after merging with another white dwarf, or pulling material from an orbiting companion star. This is a particular class of supernova explosions (known as Type Ia) that are used as distance indicators in cosmology because they are so consistent in brightness and incredibly luminous.

The explosion ejected stellar debris at high velocities, creating the supernova remnant that is seen today by Chandra and other telescopes. This new image is a composite from Chandra where low-energy X-rays are red, intermediate energies are green and higher-energy ones are blue. Also shown are optical data from the Digitized Sky Survey, with appearing stars in white. The new Chandra data, obtained in 2011, reveal that G1.9+0.3 has several remarkable properties.

The Chandra data show that most of the X-ray emission is "synchrotron radiation," produced by extremely energetic electrons accelerated in the rapidly expanding blast wave of the supernova. This emission gives information about the origin of cosmic rays - energetic particles that constantly strike the Earth's atmosphere - but not much information about Type Ia supernovas.

In addition, some of the X-ray emission comes from elements produced in the supernova, providing clues to the nature of the explosion. The long Chandra observation was required to dig out those clues.