Black Hole Bonanza Turns up in Galaxy Next Door 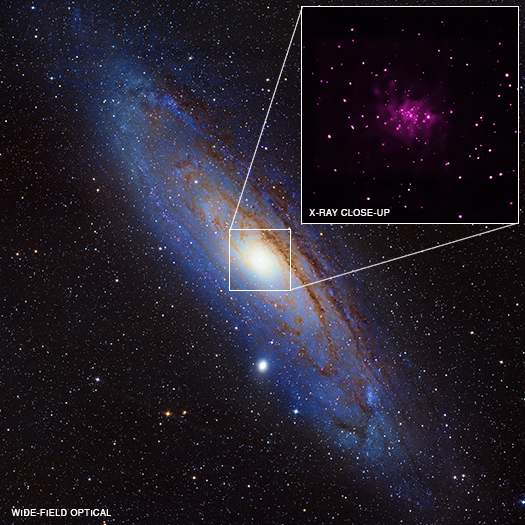 Data from NASA's Chandra X-ray Observatory have been used to discover 26 black hole candidates in the Milky Way's galactic neighbor, Andromeda, as described in our latest press release. This is the largest number of possible black holes found in a galaxy outside of our own.

A team of researchers, led by Robin Barnard of the Harvard-Smithsonian Center for Astrophysics, used 152 observations of Chandra spanning over 13 years to find the 26 new black hole candidates. Nine were known from earlier work. These black holes belong to the stellar-mass black hole category, which means they were created when a massive star collapsed and are about 5 to 10 times the mass of the Sun.

This wide-field view of Andromeda contains optical data from the Burrell Schmidt telescope of the Warner and Swansey Observatory on Kitt Peak in Arizona. Additional detail of the core and dust in the spiral arms comes from an image taken by astrophotographer Vicent Peris using data from two of his personal telescopes. In this combined optical image, red, green, and blue show different bands from the visible light portion of the electromagnetic spectrum.

The inset contains X-ray data from multiple Chandra observations of the central region of Andromeda. This Chandra image shows 28 of the 35 black hole candidates in this view, visible by mousing over the image. The other seven candidates can be seen in this Chandra image with a larger field of view.