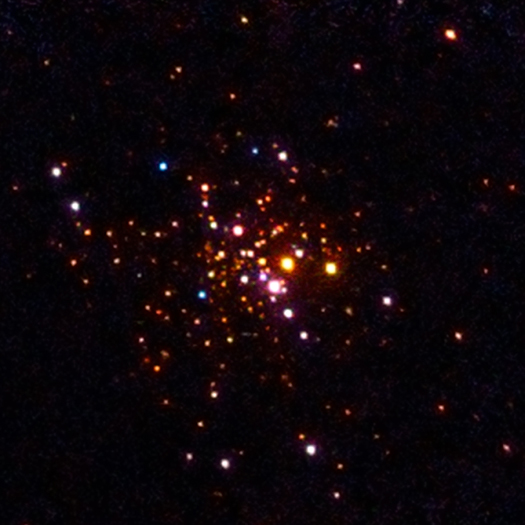 Neutron stars, the ultra-dense cores left behind after massive stars collapse, contain the densest matter known in the Universe outside of a black hole . New results from Chandra and other X-ray telescopes have provided one of the most reliable determinations yet of the relation between the radius of a neutron star and its mass. These results constrain how nuclear matter - protons and neutrons, and their constituent quarks, interact under the extreme conditions found in neutron stars.

Three telescopes - Chandra, ESA's XMM-Newton, and NASA's Rossi X-ray Timing Explorer (RXTE)- were used to observe 8 different neutron stars, including one in 47 Tucanae, a globular cluster located about 15,000 light years away in the outskirts of the Milky Way. The image shown here was constructed from a long Chandra observation of 47 Tucanae. Lower-energy X-rays are red, X-rays with intermediate energies are green, and the highest-energy X-rays are shown in blue.

In the image, the double, or binary, star system labeled as X7 contains a neutron star slowly pulling gas away from a companion star with a mass much lower than the Sun. In 2006, researchers used observations of the amount of X-rays from X7 at different energies together with theoretical models to determine a relationship between the mass and the radius of the neutron star. A similar procedure was used for Chandra observations of a neutron star in another globular cluster, NGC 6397, and for two other neutron stars in clusters observed by ESA's XMM-Newton.