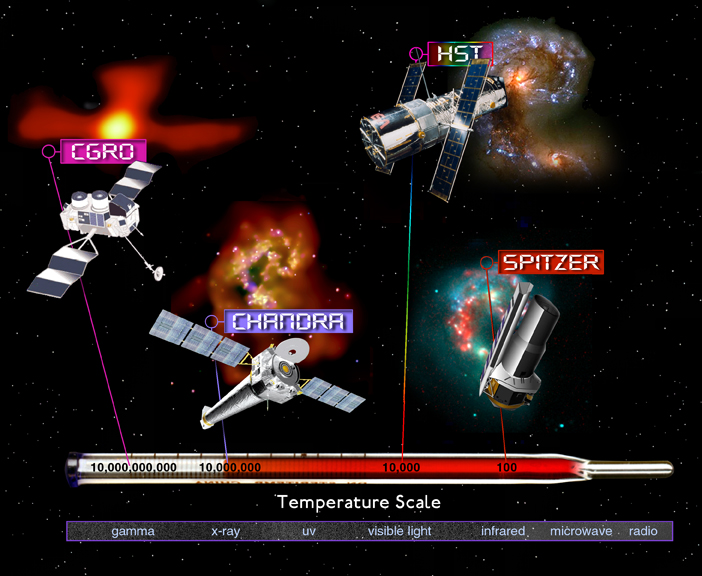 In July of 2012, Chandra completed its 13th year of operation, making it a teenager. That is young in human terms, but it is getting up there for an automobile, and could be considered a "senior citizen" for a spacecraft of Chandra's complexity. How many computers do you have that are 13 years old? Chandra's magnificent sister NASA flagship observatory, Hubble, is older, at 22, but astronauts have paid 4 house calls to make major upgrades over the years.

Chandra never gets closer than about 6,000 miles to Earth, so once it was pushed out of the Columbia space shuttle, Chandra was on its own, and has had to rely on "life-style" adjustments if anything goes wrong. A recent high-level checkup showed that very little has gone wrong, and the health of the spacecraft is excellent. A few "aches and pains" associated with age, such as degradation of the spacecraft's insulation, have made scheduling more complicated so as to avoid too much sunlight, but this should have no significant impact of the scientific productivity of Chandra for at least another decade.

The picture that emerged from the 2012 NASA senior review of Chandra is that of a major observatory in its prime. "Chandra," the reviewers concluded, "has the sensitivity, angular resolution, and spectral capability to make major contributions to practically every field of astronomy and astrophysics." The reviewers went on to say that "There is no instrument planned for at least the next two decades that will have an angular resolution (in X-rays) approaching that of Chandra."

The images included here are drawn from dozens of images posted on our website (from among hundreds taken) in the past year to show the breadth and depth of research done using Chandra. Luminous, turbulent, young stars, old stars at the end of their evolution, the rapidly expanding remains of exploded stars, a supermassive black hole hidden in the center of a galaxy, and three objects from one of the favorite types of targets for Chandra - clusters of galaxies.