A Solar Flare That Will Blow Your Socks Off

By now many of you who follow the Sun have probably heard about the “solar flare that will blow your socks off,” which occurred in early morning of Sunday June 7. Here at the Chandra X-ray Center we watched it too -- with some pride as our colleagues downstairs with the Solar Dynamics Observatory were responsible for some of the movies that were being circulated around the Internet. On the one hand, an M2 is a medium-sized event and not usually a big deal. On the other hand, I also thought of a slogan written on my whiteboard a few years ago, “West limb worry.” 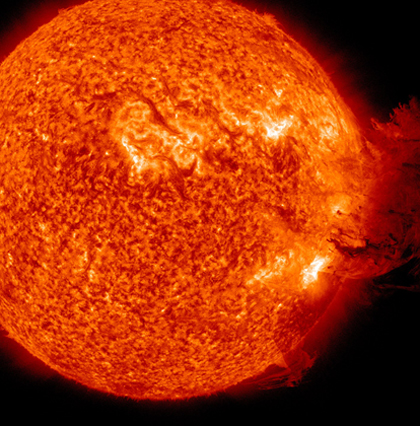 The reason I wrote that on my board was because of the "Parker spiral" and its relationship between the western limb of the Sun and the Earth. The Parker spiral is the name for the path the magnetic field takes through our Solar System. It doesn't simply move straight outward from the Sun, but instead wraps around the Sun due to the stellar rotation. When the magnetic field leaves the Sun, it travels perpendicular to the Sun's surface. But as the Sun rotates, the next field lines are dragged backwards. The resulting shape is a spiral and it is wound such that the Western limb of the sun as viewed from the Earth is connected to the Earth. So I worried… This is as much we can do about it immediately: if we see radiation rates increasing we can manually move the science instruments to a safe position, but it's difficult to estimate how quickly the ions from an event like that will reach the Earth.

At 1:45 pm Eastern on Tuesday, most the Chandra Science Center staff was in a group meeting discussing future possible endeavors for the division. Then my supervisor's pager went off, which I thought it was pretty amusing. Then someone else's phone went off, and I wondered why everybody hadn't shifted their phones to vibrate for the meeting. Then a little part of my brain woke up and told me to check my phone. It started vibrating in my hand as the alert went off to tell me that the spacecraft had autonomously moved the science instruments into the safe configuration.

Conveniently, most of the science team was already assembled due to the staff meeting and we simply found ourselves a quiet room next the meeting room and dialed in on a teleconference with the remainder of the Flight Operations Team. This resulted in a rather amusing scene of eight of us discussing who had the best speaker on their cell phone, followed by the discovery of the feedback caused by operating more than one speaker phone at the same table.

This was our first radiation shutdown in almost five years. It took us a few minutes for us to remember what the procedures were, and then each of us started going through our own checklists. This included the chief engineer checking that the spacecraft was in a stable position and good power was coming in. The mission planners looked up what observations were currently not being made and how and how important it was for them to be made and as soon as possible or in a timely manner. The instrument teams checked the specific health of their instruments and that the instruments were where they were supposed to be. I was checking the current radiation environment for Chandra as well as a series of other spacecraft such as ACE and GOES. After a brief discussion confirming that the spacecraft was safe and that the events appeared to be related to the solar flare, we were left with how to proceed from here.

This can be tricky because what we were witnessing was the arrival of the fastest high-energy protons that left the Sun. Still to come were “softer” (low-energy) protons that could take up to two more days to arrive. So we were left with a couple of choices; 1) simply sit things out for about two and a half days and restart science with high confidence after the entire storm had passed; or 2) try to pick up the schedule as quickly as possible with an observation which would be minimally affected by moderate radiation levels.

The second path would only be possible if radiation levels dropped within 16 hours. If they didn't drop, we would have wasted a lot of manpower creating a schedule we would never use and still have to write a new schedule the pickup 48 hours from then. On the other hand, picking up the schedule in 16 hours would add back nearly a day's worth of science on an instrument that costs tens of thousands of dollars a day to operate and is oversubscribed by seven to one. We chose plan two.

About eight hours after the shutdown, we had one of our thrice daily contacts with the spacecraft. At this time we checked the direct radiation environment and found it was to hot for us to restart activities. We would have exactly one more chance to check the radiation environment and decide whether or not we could restart loads or we would have to sit out 48 hours.

That chance came around seven o'clock Wednesday morning at which point the radiation levels had settled down enough for us to restart loads. We started with a matched set of observations of Alpha Centauri and things have been fine ever since.

For us, not only was this storm beautiful to behold, a credit to the Solar Dynamics Observatory, but also a reminder of how fickle space weather can be, even during this period of one of the quietest solar maximums on record.