In my last entry I described that particles coming out of the Sun -- especially what we call "soft" protons -- can damage the CCDs that we use on-board Chandra to detect X-rays. Because of this, we use a complicated network of on-board, space-based and ground-based monitors to ensure that the ACIS detector doesn't see too many of these protons. When the Sun was active, we often shut down the detector so that no damage would occur. Due to the solar cycle hitting a down phase, called "solar minimum," we haven't had to shutdown the detectors since 2006.

The current solar cycle (dubbed number 24), officially started in January 2008 when the first sunspot of switched polarity and at high latitude was seen. In the previous solar cycle (23), sunspots in the southern part of the Sun had their negative pole to the west of the positive pole -- with the situation being the opposite in the north. In January 2008, spot complexes in both hemispheres of the Sun were seen with their north poles to the west. The south has since switched polarity as well.

This was critical news for us. The solar cycle tends to take off quickly and then hold near maximum level of activity for a while and die down slowly. Solar cycle 20 started in 1965 and within three years sunspot number 1 exceeded 100 on the Sun at any given time. Likewise, solar cycle 21 started at the end of 1976, and by 1980 sunspot numbers exceeded 160. This was about the same rate was seen in 1990, about three years after the start of Solar Cycle 22.

Solar cycle 23 started in mid-1996 and was reaching it's peak just after Chandra’s launch July 23, 1999. In 2000, the sunspot level peaked at 120 a month. The predictions for solar cycle 24 came out in April 2007 and forecast a peak of between 140 and 90 sunspots per month, with the peak occurring in 2012. By mid-2010 the forecasts predicted between 50 and 100 sunspots per-month. This week marks the eleventh anniversary of our launch, exactly one solar cycle. This could mean it’s time to buckle up since we had six radiation shutdowns in 2000. 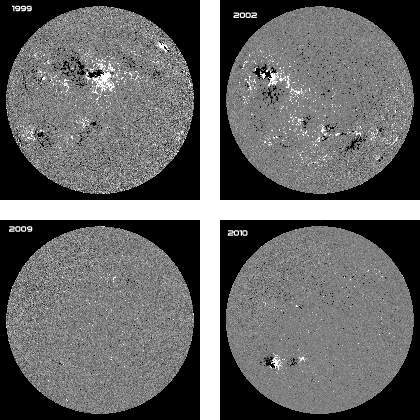 In reality, last month had 18 sunspots and no month this year has exceeded 20. The most recent forecast (which dates from about May) now predicts a maximum of 90 spots per month in 2013 so, a weak and late cycle. Furthermore, seven of the last 10 months have been below those predicted levels. June, for example, was barely 50% of the forecast level. So, it appears that this cycle will be weaker than the weakest of the predictions.

So what is going on? In truth, the astronomers who study the Sun are still working on it. The "average" solar cycle peaks at about 115 sunspots at a time. But solar cycle 14 (~1905) peaked at only 65 sunspots and solar cycle 19 (~1955) peaked at about 190. Going back to what we call solar cycle 1 in the 1760s, there was have been minor dips and peaks that seem to last a few consecutive cycles. There are also long-term cycles of variability, that including long minima that last about a 100 years, while the current period is the most active noted in the last 1000 years. So, there is a natural variability and it looks like we are going to be lucky this time around and Chandra will have less need to shut down to protect the instruments than usual. This also means less chance of large solar flares that can damage the electrical grid on Earth and less heating of the upper atmosphere, which can puff-up the Earth's atmosphere and drag down satellites like Hubble, bringing them to a premature end.

Is that the end of the story? Does this "quiet" Sun means no worries? Not quite. One problem is that we as a society need the Sun to be somewhat active. The X-ray flux from the Sun, while a tiny fraction the total luminosity ( estimates I have seen expect greenhouse gases to out-pace solar cooling by ten to one. And the Sun will eventually turn on again, maybe during this current cycle.

Anyhow for Chandra it would mean a quiet ride. Or does it? It really means solar cycle 24 will be a trip into the unknown. We don't know what the space environment is like when the Sun is in a sustained quiet period. The solar wind is tied to sunspots and pushes back on cosmic rays. Therefore, fewer sunspots mean more cosmic rays striking both the Earth and Chandra. The Sun has also done a few unusual things when it has had activity, including a burst of electrons. This has made for some interesting days for us here trying to keep Chandra safe. More about that, next time.

1. The term "sunspot number" is a combination of sunspots and their groupings used because it compensates for variations in observing small sunspots and using different telescopes. The value can vary depending on how many and what kind of observatories are involved. Typically the "International" number is higher than the NOAA or "Boulder" number by 25% for this reason. Next, scientists have to average over the month, which kind of works out because MOST of the Sun completes a revolution in a month although we move about 1/12 of the way around the Sun.