Many of this week's blogs focused on that little-known telescope that's being invaded by a spaceship. In case you missed it, the telescope is called "Hubble" and the spaceship is our Space Shuttle Atlantis. Naturally, the astro-blogosphere took notice. In his "Dynamic of Cats" blog, Steinn Sigurdsson talks about the last pretty picture to come out of that workhorse instrument with the stubborn screw -- Wide Field/Planetary Camera 2. 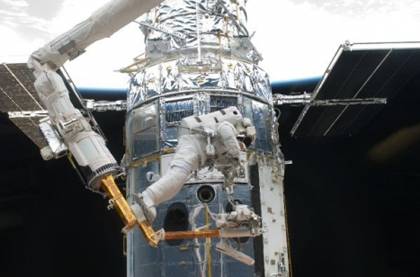 Phil Plait uses the occasion of SM-4 to feature Hubble in his "Ten Things You Didn't Know" series. This includes setting some records straight about Hubble urban legends as well as pointing out some surprising things it actually has done that havenâ€™t gotten a lot of attention.

A more Shuttle-centric view of the latest and last servicing mission is given at Collect Space. The Cumbrian Sky also has a lot of good details about what the astronauts have been up to.

On a related note, the Martian Chronicles, well, chronicles what is left to be desired by NASA-TV. Here's a hint: it's a lot.

Jim Plaxco at Artsnova Digital is worried about the possibility of scrapping plans to go back to the Moon and shares his experiences with talking to high school students about it. He also reports on a talk he attended by Congressman Mark Kirk on space-based solar energy.

There's some more space history in Out of the Cradle in the form of review on a graphic novel that tackles Apollo 11's trip to the Moon.

Mike Simonsen covers a really nice story about the naming of an asteroid. Curious about minor planet #6708 being named after Bobbie Vaile, Mike did a little research. He found out this Australian was a tireless supporter and communicator of science and that this "remarkable asteroid [was] named after a very remarkable woman."

Over at AstroEngine, Ian O'Neill tackles the tough game of trying to figure out what our Sun will do next. Of course anyone with a cell phone -- and likes living on planet Earth -- has a vested interest in this.

The Meridian Journal is getting excited about the Kepler mission, which will begin its hunt for exoplanets very soon.

Crowlspace tackles a pretty tricky topic of some discrepancies between theory and observation on the helium main sequence.

Finally there were a slew of posts on the week's other big science (fiction) news: the release of the latest Star Trek movie. The Next Big Future covers the advances in digital displays (TVs and beyond) over the lifetime of Star Trek, that is, from 1966 to now. Centauri Dreams also uses the new Star Trek as a topic for a post, but this one is to take a look at some of the issues Athena Andreadis has with this film. There's more discussion on Star Trek over at 21st Century Waves.

Now if we could just get the USS Enterprise to visit Hubble, then we would all really have something to talk about.