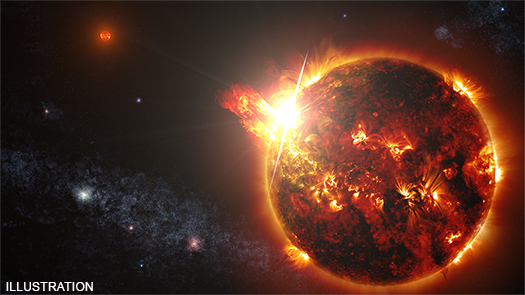 This artist's illustration depicts a coronal mass ejection, or CME, from a star. These events involve a large-scale expulsion of material, and have frequently been observed on the Sun. A new study using NASA's Chandra X-ray Observatory has detected a CME from a different star, as reported in a new press release, providing a novel insight into these powerful phenomena. As the name implies these events occur in the corona, which is the outer atmosphere of a star.

This "extrasolar" CME was seen from a star called HR 9024, which is located about 450 light years from Earth. This represents the first time that researchers have thoroughly identified and characterized a CME from a star other than the Sun. This event was marked by an intense flash of X-rays followed by the emission of a giant bubble of plasma, i.e., hot gas containing charged particles.

The results confirm that CMEs are produced in magnetically active stars, and they also open the opportunity to systematically study such dramatic events in stars other than the Sun.

The High-Energy Transmission Grating Spectrometer, or HETGS, aboard Chandra is the only instrument that allows measurements of the motions of coronal plasmas with speeds of just a few tens of thousands of miles per hour, like those observed in HR 9024. During the flare, the Chandra observations clearly detected very hot material (between 18 to 45 million degrees Fahrenheit) that first rises and then drops with speeds between 225,000 to 900,000 miles per hour. This is in excellent agreement with the expected behavior for material linked to the stellar flare.

A coronal mass ejection (CME) of our Sun as observed by NASA's Solar Dynamics Observatory on August 31, 2012.

A paper describing this study appeared in the May 27, 2019 issue of Nature Astronomy and a preprint is available here. The lead author is Costanza Argiroffi of University of Palermo in Italy and the National Institute for Astrophysics (INAF) in Italy. NASA's Marshall Space Flight Center in Huntsville, Alabama, manages the Chandra program for NASA's Science Mission Directorate in Washington. The Smithsonian Astrophysical Observatory in Cambridge, Massachusetts, controls Chandra's science and flight operations.