Traveling to Our Galactic Center Through Virtual Reality 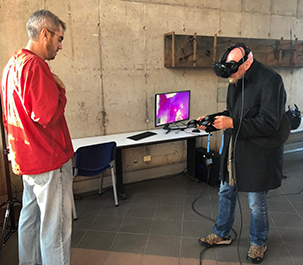 "Galactic Center VR" is an astronomy outreach app available now from the Steam and Viveport virtual reality (VR) stores. What is in this VR experience, and how did it come about? Dr. Christopher Russell, Director of the VR Lab at the Instituto de Astrofísica, Pontificia Universidad Católica de Chile (PUC), tells us in this blog post.

"Galactic Center VR" (GCVR) transports you 26,000 light years away to the center of our Milky Way. This fully immersive VR experience lets you explore our NASA supercomputer simulations of the central three light years around Sagittarius A* (Sgr A*), our galaxy's supermassive black hole. While the black hole is the region's dominant feature, the visual appeal comes from the complex structure of colliding winds from 25 massive stars, much of which is heated by shocks — akin to sonic booms from supersonic aircraft — to be aglow in X-rays and therefore studied with NASA's Chandra X-ray Observatory. 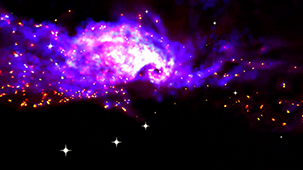 GCVR loads the present-day snapshot of the simulation into a virtual environment, initially having the user stand or sit right on top of the black hole. Then with either physical movement — walking, crouching, leaning, etc. — or pointing and clicking the controllers, the user can travel anywhere they like within the central parsec (which is an astronomical term for a distance of 3.26 light years), all the while looking in any direction that they choose. GCVR gives the user six degrees of freedom (or 6 dof): three translational and three rotational. This provides the user full immersion into the Galactic Center, which is only possible in VR.

There are several exploration options available in this VR experience. The user can load all 25 winds for the complete simulation, which is available in three resolutions to accommodate a range of VR users' computing capabilities. Or they can load only one stellar wind at a time, which is available for our three favorites: IRS16C – the closest to Sgr A*, IRS33E – has the clumpiest wind and garners the most attention in my 360-degree videos of these simulations, and IR13E4 – has the strongest shock and is brightest in X-rays. It is quite interesting to see the structure that these individual winds end up forming in the simulation; the gravitational influence of Sgr A* and the collision with neighboring winds make the situation significantly different from simple, spherically expanding outflows. 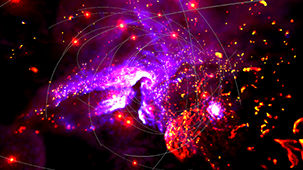 For either the all-winds or one-wind option, GCVR can render just the winds themselves, just the X-ray emission — the same X-rays studied extensively by Chandra — or both. The user can turn on and off the orbit lines of the stars, as well as make Earth appear and disappear. It is interesting to fly towards Earth (be sure to wave to yourself) and then spin around to see the one perspective that all telescopes have of the Galactic center.

There is also a brief tutorial explaining what is in the VR app and notes attached to each controller button, making the app completely self-contained.

We have been researching the Galactic Center via these simulations and using Chandra data as our observational anchor for a while. I created 360-degree videos from the simulations that place the viewer at the location of Sgr A* and allow them to look anywhere — up, down, left, right, in front and behind — at the orbiting stars, colliding winds, and material inspiraling towards them, and the black hole. Especially striking is when clumps of material would tidally stretch on their way towards Sgr A*. With the backing of two Chandra/NASA press releases, for which I am still very grateful, these videos have amassed YouTube and Facebook tallies of 1.3M and 400K — much more than I thought would occur.

After the first video's success, Jorge Cuadra, my postdoc host researcher, asked if I wanted to get a room-scale VR set to take this work even further; 360-degree videos provide only 3 degree of freedom (3 dof, rotation only), while VR is the full 6 dof. In a decision on par with my faith in Ziploc bags for unintended uses, I passed. Fortunately, though, Jorge knew better (that is why he is the professor) and a year later we opened the Instituto de Astrofísica VR Lab with the room-scale HTC Vive VR system in Feb 2019. 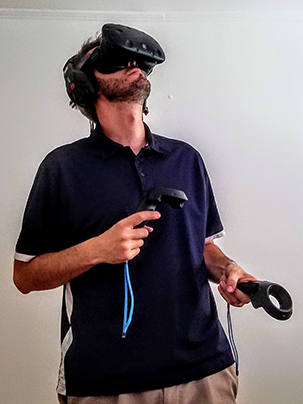 The key to this whole project being successful was having talented students to work with. Miguel Sepúlveda, an undergrad from neighboring Universidad de Chile, and I pivoted from a malware-canceled VR project to getting the Galactic Center simulations into phone-based VR via the game engine Unity. Then Baltasar Luco, an undergrad from my university PUC, joined me in the VR Lab to develop the interface for exploring the simulations in room-scale VR. Since this was PC based instead of phone based, the computing capabilities were significantly increased, giving us the option to significantly ramp up the VR experience.

Our first public demo was at the solar eclipse in the north of Chile in July 2019. Joining our institute's outreach team in Vicuña, Coquimbo, we demoed the VR to locals and eclipse chasers alike. After returning to Santiago, Nobel Laureate Prof. Kip Thorne gave a talk for our university's physicists and astrophysicists. With the VR app setup outside in anticipation, I got to give a demo to the Nobel Laureate, which was quite the experience. This was the most worried as I have ever been about some technical glitch happening, but the VR performed admirably. We even have a "very impressive" quote on camera.

With a metaphorical seal of approval from a Nobel Laureate, and the positive reaction from Vicuña, we then decided to make a version for public distribution. After Baltasar and I worked on this for another semester, we submitted the app to the VR stores Steam and Viveport. Contrasting with the journal article submission process, these submissions involved creating promotional materials necessary for the respective VR-store webpages, and then each platform tested the app for functionality and content. (This counts as peer-reviewed, right?) "Galactic Center VR" was publicly released on March 24, 2020.

Currently, "Galactic Center VR" is available on Steam and Viveport for the HTC Vive, though we plan to develop versions for other VR headsets in the future.

GCVR is free. We gratefully acknowledge the support of FONDECYT Postdoctorado 3170870 (PI: CMP Russell), CATA-UC, our MPE Partner Group (PI: J Cuadra), and our institute for funding this work.

Don't have an HTC Vive? Try a smartphone-friendly version: https://chandra.si.edu/vr/gcenter.html

More information on other Chandra-based VR projects is at: https://chandra.si.edu/vr/