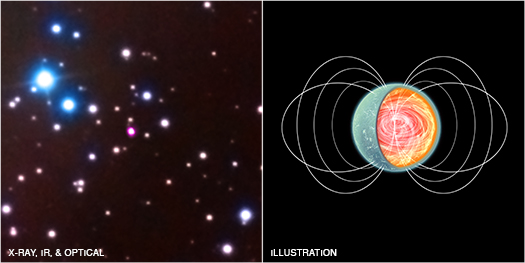 This graphic shows an exotic object in our galaxy called SGR 0418+5729 (SGR 0418 for short). As described in our press release, SGR 0418 is a magnetar, a type of neutron star that has a relatively slow spin rate and generates occasional large blasts of X-rays.

The only plausible source for the energy emitted in these outbursts is the magnetic energy stored in the star. Most magnetars have extremely high magnetic fields on their surface that are ten to a thousand times stronger than for the average neutron star. New data shows that SGR 0418 doesn't fit that pattern. It has a surface magnetic field similar to that of mainstream neutron stars.

In the image on the left, data from NASA's Chandra X-ray Observatory shows SGR 0418 as a pink source in the middle. Optical data from the William Herschel telescope in La Palma and infrared data from NASA's Spitzer Space Telescope are shown in red, green and blue.

On the right is an artist's impression showing a close-up view of SGR 0418. This illustration highlights the weak surface magnetic field of the magnetar, and the relatively strong, wound-up magnetic field lurking in the hotter interior of the star. The X-ray emission seen with Chandra comes from a small hot spot, not shown in the illustration. At the end of the outburst this spot has a radius of only about 160 meters, compared with a radius for the whole star of about 12 km.