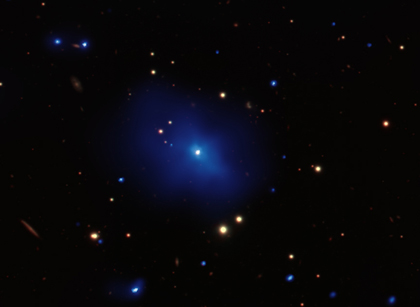 NASA's Chandra X-ray Observatory has observed an unusual galaxy cluster that contains a bright core of relatively cool gas surrounding a quasar called 3C 186. This is the most distant object yet observed, and could provide insight into the triggering of quasars and the growth of galaxy clusters.

This composite image of the cluster surrounding 3C 186 includes a new, deep image from Chandra (blue) showing emission from gas surrounding the point-like quasar near the center of the cluster. Chandra X-ray spectra show that the temperature of the gas drops from 80 million degrees on the outskirts of the cluster down to 30 million in the core. This drop in temperature occurs because intense X-ray emission from the gas cools it. Optical data from the Gemini telescope in yellow show the stars and galaxies in the field of view.

What makes this particular galaxy cluster and its strong cooling core interesting is its age. 3C 186 is about 8 billion light years away from Earth, making it the most distant known galaxy cluster to contain a prominent cooling core. Because of its large distance the cluster is being seen when the Universe is relatively young, at less than half its current age.

Previous observations have revealed large numbers of clusters with strong cooling cores at smaller distances from the Earth, less than about 6 billion light years. Far fewer, however, have been found at larger distances between 6 and 8 billion light years. Considering its young age this "precocious" galaxy cluster around 3C 186 appears to be surprisingly well formed.

One explanation why fewer cooling cores are seen at larger distances is that these younger clusters experience higher rates of merging with other clusters or galaxies. These mergers would destroy the cooling cores. When coupled with the fact that it takes cooling cores a long time to form, this would make them rare in the earlier stages of the Universe.