What We Found When We X-rayed Uranus 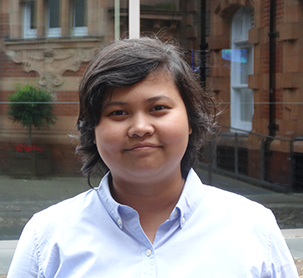 We are pleased to welcome Affelia Wibisono, who received her Masters degree in Physics from Royal Holloway, University of London in 2012, as our guest blogger. She worked as a science communicator at London’s Science Museum and the Royal Observatory Greenwich before starting her PhD in 2018 at University College London’s Mullard Space Science Laboratory (MSSL). Her research interests are in X-ray emissions from planets in our Solar System, in particular how and why Jupiter produces intense X-ray auroras.

Huge, violent and exotic objects in space such as black holes, supernovae and quasars are what usually come to mind when one thinks about X-ray astronomy. But it’s the more humble X-ray sources found closer to home that my research group and I want to know more about. Many things in our Solar System emit X-rays, such as the Sun, comets, moons and even Pluto. Astronomers have also detected X-rays from the four rocky planets, Mercury, Venus, Earth and Mars, and from the gas giants Jupiter, and Saturn. However, efforts to find X-rays from Uranus in 2002 and 2017 were fruitless — or so we thought.

There are three main ways that a planet can produce X-rays: fluorescence, scattering of solar X-rays, and auroral emissions. The Sun bombards the rocky surface of Mercury, for example, with energetic particles that make the rocks fluoresce, or glow, in X-rays. Measuring the energy of the X-rays can tell us the elemental composition of Mercury’s surface. Jupiter’s and Saturn’s atmospheres scatter and reflect X-rays released by the Sun. Saturn’s rings also fluoresce and this is actually the brightest part of the planet when seen in X-rays. X-ray auroras have so far only been detected at Jupiter and the Earth. Our X-ray aurora is caused by energetic electrons as they accelerate along the Earth’s magnetic field lines that enter the planet’s polar regions. The atoms and molecules in the atmosphere deflect and slow the electrons down, producing X-rays via a process called "bremsstrahlung radiation", or "braking radiation". Jupiter's X-ray aurora come in two types — the first is produced in the same way as the Earth’s, while the second is due to positively charged atoms, or ions. These ions are also accelerated down the magnetic field lines but when they enter Jupiter’s atmosphere at the poles, they steal an electron from an atom or molecule from the planet’s atmosphere. The captured electron initially has a lot of energy, but soon releases its excess energy in the form of X-rays. This process is called “charge exchange”.

We know that the Sun plays a big role in how many X-rays are emitted by planets. For example, the more X-rays the Sun releases, the more solar X-rays Jupiter and Saturn will reflect. The stream of energetic particles released by the Sun is called the solar wind. Sometimes the solar wind can be like a gentle breeze and doesn’t affect a planet’s magnetosphere (a giant bubble of magnetism that surrounds a planet with a global magnetic field) very much. Other times, the magnetosphere can be squashed by a strong gust of solar wind, and we see that the X-ray auroras on Earth and Jupiter brighten when this happens. We don’t have any spacecraft that monitors the solar wind in the outer Solar System so we have to make do with models that take in measurements of the solar wind at Earth and propagate it to Uranus. Chihiro Tao, from the National Institute of Information and Communications Technology in Japan, has one such model. It predicted that a solar wind shock caused by two merging streams of energetic solar particles, was going to hit Uranus. With this knowledge, William Dunn, the lead author of our paper and one of my PhD supervisors at MSSL, succeeded in getting two 25,000 seconds (about 7 hours-long) observations of Uranus on 11 and 12 November 2017 to coincide with this solar wind shock.

Chandra’s High Resolution Camera (HRC) gathered X-rays from the part of the sky that Uranus was in for about 7 hours on each day. During this time, it detected several X-ray sources in the background. From recent studies of Jupiter and Saturn, we know that most of the planets’ X-ray emissions, no matter how they were produced, have energies between 0.2 – 1.5 keV (the lower range of X-rays that Chandra can detect). Most X-rays with energies higher than this are from background sources. Unfortunately, we weren’t able to separate those background X-rays from Uranus’ elusive X-rays since we couldn’t measure the energies of the X-rays using HRC. 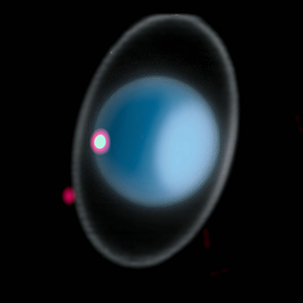 What we were able to do was to divide the HRC detector into a grid with boxes that are the same size as the region occupied by Uranus. We then counted how many X-ray photons was in each box and calculated the mean number of X-ray photons in each box. The first day of observations gave us a negative result: the box with Uranus in had fewer X-ray photons than the mean. This makes sense since Uranus is in the foreground and would block out the background X-rays. The results from the second day were more interesting. The number of X-rays from Uranus’ box increased by a statistically significant amount so that it was now a little bit higher than the mean. What we also noticed was that Uranus appeared to release an X-ray “flare” about 5 hours into the second day – the number of X-rays from the planet’s location on the detector more than doubled while the rest of the detector was detecting the same number of X-rays as before. However, the results from 12 November 2017 could have been a statistical fluke and so we couldn’t say that we had detected X-rays from Uranus. To be thorough, Will then decided to look at the one other Uranus dataset obtained by Chandra, which was from August 2002. 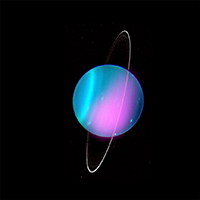 A similar method that was used on the 2017 data was used to analyse the one from 2002. The difference was that the measurements were taken by Chandra’s Advanced CCD Imaging Spectrometer (ACIS) instrument, which has spectral resolution: it can measure the energies of the X-rays. This gave us a way to cut out most of the background X-rays that were complicating the HRC observations! Amazingly, when we took away those X-rays with higher energies, we saw that the region of the detector with Uranus on it still had the same number of X-rays as before — that's promising! We found that this part of the detector had a lot more X-ray photons than the mean count for the whole detector. More than enough to say that we detected X-rays from Uranus!

In fact, curiously, our calculations suggest that Uranus was producing more X-rays than it should if the planet was only scattering the Sun’s X-rays, so could there be at least one other process at play and what are they? Are Uranus’ rings fluorescing like Saturn’s? Or could this oft-forgotten world have X-ray aurora like Jupiter and the Earth? More observations of Uranus by Chandra and other X-ray telescopes are needed before we can give a definitive answer.

We know so little about the puzzling Ice Giant planets of Uranus and Neptune, neither of which have been explored with spacecraft since Voyager 2 in the late 1980s. Voyager unveiled Ice Giant systems rich with marvels, exotic icy moons, dynamic rings and bizarre multi-polar, offset and tilted magnetic fields. With recent NASA/ESA orbiters like Cassini and Juno revolutionising our understanding of Saturn and Jupiter, a similar spacecraft to the Ice Giants would uncover a treasure trove of scientific riches and revolutionise our understanding of Earth’s place in the cosmos.