The Secrets of the Sun Revealed in the Stars

We are pleased to welcome Nick Wright as our guest blogger. Nick is the lead author on a paper featured in our latest press release, about how magnetic fields are generated in stars. He is an astrophysicist working at Keele University in the UK. He completed his PhD at University College London before moving to the Smithsonian Astrophysical Observatory to study X-ray emission from both young and old stars. After almost 5 years working in the US he returned to England as a Royal Astronomical Society research fellow at the University of Hertfordshire and is now an Ernest Rutherford Fellow at Keele University. When not studying the stars or writing about them on his blog, Nick enjoys cooking, gardening and travelling. 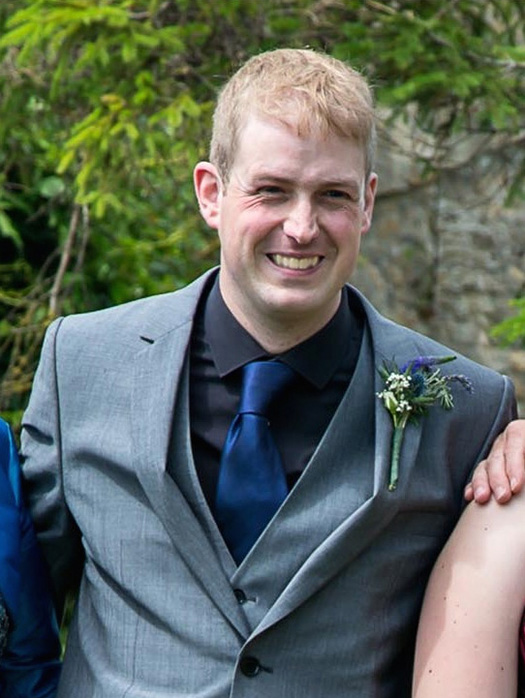 Magnetic fields in the Sun and Sun-like stars are generated by a dynamo, a process involving the rotation of the star as well as convection, the rising and falling of hot gas in the star's interior. Understanding the magnetic dynamo of our Sun is important because it is responsible for a lot of interesting and energetic solar phenomena, some of which can have a considerable impact on our Earth and the wider Solar System. The Sun's magnetic field is responsible for sunspots on its surface, the 22-year magnetic activity cycle (the "Solar cycle"), the Solar wind that pummels planets throughout our Solar System and the ejections of large quantities of plasma – a gas composed of free electrons and free atomic nuclei – known as coronal mass ejections. This ejected material can have a serious impact on Earth, resulting in geomagnetic storms that disrupt radio transmissions, damage satellites and electrical grids, as well as harm astronauts or even people flying in airplanes at high altitudes. 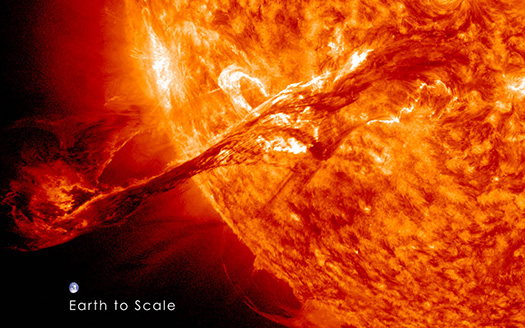 A long filament erupted on the Sun on August 31, 2012, shown here in this still captured by NASA's Solar Dynamics Observatory (SDO). The eruption, an example of a coronal mass ejection, lasted from noon EDT to 1:45 a.m. the next morning. The image shows ultraviolet light, which helps scientists observe the sun's outer atmosphere, or corona. Pictured next to the filament is a superimposed Earth, shown to scale (caption adapted from this NASA site). Credit: NASA/SDO/AIA

Astronomers have known about various aspects of Solar activity since the Solar cycle was first discovered in the 19th century. To get a full picture of the range of magnetic behavior that our Sun could exhibit, and to understand how our Sun’s activity might evolve over time, astronomers have typically turned to other stars like our Sun but differing in age to study their magnetic properties.

Our Sun is a yellow dwarf star, and has a slightly above average mass compared to most other stars, though there are stars as massive as 100 times our Sun, and some that would weigh as little as one hundredth the mass of our Sun (if you could weigh a star that is!). Stars similar to our Sun show a range of magnetic activity levels, with the majority being considerably more active than our own Sun.

One of the simplest and most effective ways to measure the activity level of a star is to measure how bright it is in X-rays using an X-ray telescope such as NASA’s Chandra X-ray Observatory. Stars like our Sun are surrounded by a low-density plasma of incredibly hot gas known as a corona that radiates in X-rays. The corona is heated by the star’s magnetic activity, so stars that have a high level of magnetic activity are more luminous X-ray sources.

In 2011 my collaborator, Jeremy Drake, from the Harvard Smithsonian Center for Astrophysics in Cambridge Massachusetts, and I measured the X-ray properties of a huge sample of over 800 stars and studied how their X-ray emission related to their rotation rates. Such a correlation is thought to be a very strong indicator of the underlying magnetic dynamo that converts convective and rotational energy into magnetic energy inside stars. A correlation between these two quantities had been known for many decades, but using this large sample we were able to measure it much more precisely than had previously been possible.

After the work was finished and the paper was published, Jeremy and I were thinking about how we could extend the work and better characterize the relationship between X-ray activity and rotation that was so critical for understanding the magnetic dynamo. We realized that while our sample was very large we were actually missing an important type of star. While our sample included both rapidly and slowly rotating stars like our Sun, it only included rapidly rotating examples of stars with much lower masses than our Sun and we were missing slowly rotating low-mass stars from our sample (stars much more massive than our Sun don’t seem to operate a magnetic dynamo so we were less concerned about those).

This made us wonder what the magnetic properties of slowly rotating low-mass stars were like and whether they were similar to objects like our Sun. Very low-mass stars are interesting because they have different internal structures compared to stars like our Sun. Our Sun’s internal structure is divided between an inner radiative zone and an outer convective zone. The two regions rotate at different speeds and the interface region between the zones has long been thought to be critical for how the magnetic dynamo works by a process of twisting, stretching and strengthening of the magnetic field within the star. Low-mass stars (less than half the mass of the Sun) only have a convective zone and so they lack such an interface region meaning that their magnetic dynamos have for a long time been expected to operate very differently, particularly if the star is rotating quite slowly.

We searched the literature for a sample of slowly rotating low-mass stars that were sufficiently nearby that we would be able to detect them in X-rays. We then wrote a proposal asking for time with Chandra to observe these stars and measure their X-ray luminosities. With this information we would be able to compare the relationship between their X-ray luminosity and their rotation period to study whether the relationship is similar to that observed in stars like our Sun. 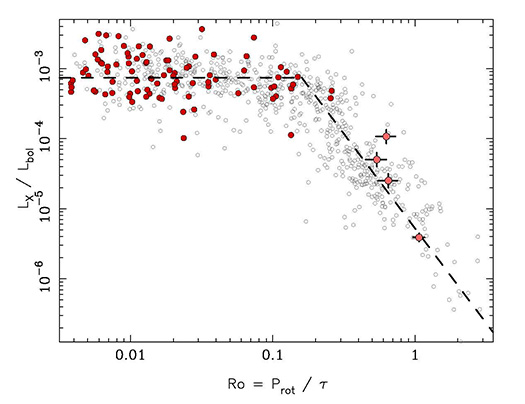 FIGURE 3: The relationship between a star’s rotation rate and its X-ray brightness (see text for more details). Credit: N.Wright.

Once the data were taken and additional data were gathered from the literature we had a sample of four slowly rotating low-mass stars with measured X-ray luminosities. We were then able to plot all four stars on the rotation – activity diagram that already included hundreds of more massive or more rapidly rotating stars. Figure 3 shows the rotation-activity diagram, with the x-axis representing a quantity that is proportional to each star’s rotation rate and the y-axis showing the X-ray luminosity of each star compared to the star’s total luminosity across the full electromagnetic spectrum, e.g. including ultraviolet, optical and infrared light. The four slowly rotating low-mass stars are shown in light red, the rapidly rotating low-mass stars in shown in dark red and the other objects are more massive stars (like our Sun).

What we found really surprised us, which was that the four slowly rotating low-mass stars lined up on the existing correlation almost perfectly! Since these stars have such different internal structures we really expected them to have different magnetic dynamos and therefore to have a very different activity – rotation relationship.

One of the interesting implications of this result is that because we found that stars with very different internal structures appear to have magnetic dynamos with similar properties, it means that the dynamo must originate in a part of those stars that both types of star share. That means the interface layer between the radiative and convective zones in stars like our Sun can’t be critical to how the dynamo operates because low-mass stars lack such a layer. This has major implications for those models of the Solar dynamo that rely on this layer to power the dynamo – these models may now have to be revised.

This research shows how the technique of studying many different types of object can help you understand a single object that you thought you understood. This method is sometimes referred to as “exploring the parameter space” and is a very common technique in fields such as astrophysics where we can’t always go out and perform the experiment we would ideally like to.

If this result is confirmed with a larger sample of slowly rotating low-mass stars it would be really important for how we understand magnetic activity in low-mass stars, and it would also have major implications for understanding the structure and magnetic dynamo of our own Sun. It continues to fascinate me how much we can learn about our own Sun from studying distant stars!